Have a question about a Dropbox app or installation? Reach out to the Dropbox Community and get solutions, help, and advice from members.

@Marvin McKenzie It's a gradual rollout; you'll get the upgrade when you get to the top of the rollout queue sometime in the next week or two. If you're impatient and like to live dangerously, you can install it manually via an installer HERE. From personal experience, I would recommend waiting.

Emma
Community Manager
@jlaguna thank you for your feedback on this!

The team have captured this feedback and we're continuing to work on improving the experience.
1 Like
Reply 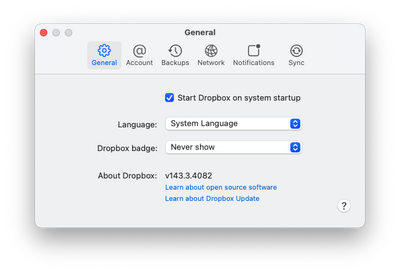 I've been complaining about the missing green checkmarks and the inconsistent behavior of the "cloud" icon. Have these issues been fixed? Is the green checkmark coming back?

The green checkmarks are probably not coming back because of the way sync works on macOS and the adjustments Dropbox had to make. These adjustments are also the reason that you files are moved to the new ~/Library/CloudStorage folder. Dropbox does not explain this very well I guess, or I just could not find it. There is an article by Microsoft about the same changes that where applied to OneDrive. https://techcommunity.microsoft.com/t5/microsoft-onedrive-blog/inside-the-new-files-on-demand-experi...

To my understanding, but Dropbox should explain this in more detail: Some functionality will most likely only come available when Apple decides to add it to their API's, which are in some way a bit limited compared to the old Kernel Extensions that where used. The Kernel Extension will be removed from macOS with the 12.3 update, which has been announced by Apple a few years ago.

The green checkmarks are built as Finder Extensions and have been quirky for a long time and Apple will probably remove those at a certain time also.

The way it works now is more in line with Apple's guidelines for how syncing should work on macOS and that is also the reason why you see other icons.

@Wvp Thanks, you're pretty much right on all counts, as confirmed to me the other day (after weeks of complaining on my part) by a Dropbox tech guy. I hadn't realized that Dropbox has released both a beta of an Apple Silicon version of its classic app (which is running on the Mac Air in my office) and a beta of a version that complies with the strictures of Apple's File Provider services (which is running on my MacBook Pro). Only the latter is viable longterm, as Apple is going to disable the extensions that the class app uses (as you note). The lack of clarity and transparency on Dropbox's part about these betas has been gobsmacking. Unfortunately it goes hand in glove with their horrible initial response to the pleas of Mac users for a native app. Very disappointing behavior from a company that had been know for such high quality software.

Native Apple silicon support is now fully available. All users with Apple silicon devices will receive the native version of Dropbox automatically. If you would like to update your device manually, you can do so by clicking on the latest Stable Build and downloading the Offline Installer (Apple Silicon) file. For more information, visit the Dropbox Help Center.

If you need assistance with anything else, please feel free to create a new thread and our community team will be happy to assist.

But why are the sync icons now reduced to a freakin' cloud-with-arrow and cloud without arrow? I read what was said about Apple's new restrictions and bla, bla, bla, but aren't icons just symbols that can be anything the developer wants them to be? Why can't a gray cloud icon signifying that something is actually already downloaded/synced be a green arrow instead, like it used to be? It seems to be obvious that most people are looking for a green checkmark when a file is downloaded/synced, so why replace it with a puny, faint, cloud that I have to actually look for, amongst all the almost identical cloud icons with a tiny arrow in it?!

Yes, I do realize that I sound borderline hostile, but after waiting for over a year to get an AS-native version of the Dropbox client, and then getting one that takes away logical conventions and just changes the location of all the files without a proper warning or explanation, that makes me borderline hostile.

Seriously, Dropbox, please start being the technology leader you pretend to be. There are other solutions out there, so don't be so arrogant as to think we are tied to you without options. Explain to people what you're about to do with their entire file library and why. And please bring back the green checkmarks...it's just a symbol...of you hearing us.

Dropbox techs have told me that, with the move to Apple's File Provider framework, their hands were tied re the iconography but that's bullsh*t. Google Drive has recently migrated to the FP framework and they still have nice green checkmarks next to sync'd files.

...they can't use the green checkmarks because of COVID...no, wait, because of the war in the Ukraine...lame excuses.

On a more immediate and pragmatic note, what could be the reason that my Dropbox client just shows a red exclamation mark after "finishing" the syncing of all my files (or maybe not)...I have around 500k files on Dropbox and it synced all afternoon and into the night, yesterday and today, but didn't seem to finish the sync entirely...it still shows "Syncing..." at the bottom of the client, even after quitting and restarting it.