Make your Dropbox account work for you, with the help of Community users like you. Join in or start a discussion of your own.

After contacting Dropbox.com support, they said that they cancelled my free trial from Apple, as requested.

On the payment page on Dropbox.com I get the error "We’re having some trouble right now. Please try again later."

After reading other posts it seems like there is an integration issue with Apple and Dropbox.  How can I have this resolved?

Could you attach a screenshot showing the error message you're getting, while hiding any personal details?

Have you contacted your bank to see if the payment is being declined for some reason?

Here is what shows:

Entering my credit card details does nothing, because the button under Dropbox Professional is just 3 blinking dots. 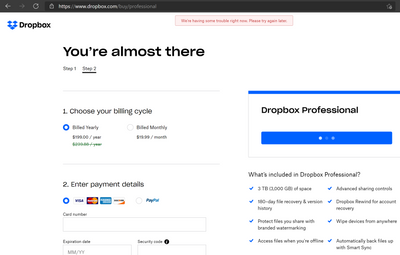 Jay
Dropboxer
Thanks for the image, it seems like something is preventing the site from loading correctly.

Could try using incognito/private browsing mode without any extensions and plugins running, and to disable any security software or VPN if need be, and let me know how it goes!

I've already tried this, but have just tried to do so again.  I also attempted to do the same via my iPhone on my cellular network, in case my WiFi was at fault.

Everyone at Dropbox keeps pointing me to common ways to resolve the issue, essentially putting the blame on me.  I think this needs someone from the tech-engineering team to review the account.  My guess is that on the backend, the integration between Apple and Dropbox is holding my account "hostage" and preventing me from signing up directly at Dropbox.com.

Can someone from tech support look into that?

Right now, the only other hope I have is to wait for my trial via Apple to officially expire.  Even though the trial is cancelled on Dropbox's end, that trial may be somehow still linked to my account.

Jay
Dropboxer
Do you have a ticket ID when when you contacted support in order to look into this in more detail? Thanks!

Jay
Dropboxer
Thanks for that, I can see it is currently forwarded to a specialist team, who will be investigating this further.

I've gone ahead and prioritized the ticket to expedite matters on your behalf.

Much appreciated!  Looking forward to getting this resolved.  It may ultimately "fix itself" as the Apple iTunes trial officially ends today.  I am crossing my fingers that tomorrow it will work.

But still, this is an issue that other clients have encountered and should be rectified.

This issue is now resolved.  Either the tech team was able to fix it, or the trial with Apple officially ended today.

I would encourage the engineering team to continue to research as this is definitely an issue for other clients in this scenario.