Again, the automatic update to this release has broken the ability to keep the Dropbox icon on the Taskbar, rather than in the Hidden Icons popup menu. The "Select which icons appear on the taskbar" submenu of Taskbar Settings appears like the image below, and no amount of fiddling with the switches on the two Dropbox icons will stop it reverting those settings after logging out and back in and/or rebooting.

Interestingly, this only happens on my 64-bit system. My old 32-bit system doesn't exhibit this (mis)behaviour. Both are running Windows 10 and are kept fully updated.

Reinstalling the same beta release with the Standard Installer fixes the problem.

I have been away from my systems over the holiday period, so have not posted on the intervening betas since 138.3.2361, but I assume nothing has been done to fix this annoying glitch since then.

I have unset the 'early releases' option and installed the latest stable build, 139.4.4896. 😥 Please let me know when the problem is fixed, so that I can return to receiving early releases.

@Anonymous M. Is this a joke?

No it really is Silicon !!

No problem so far...not that I had any when it was Intel. 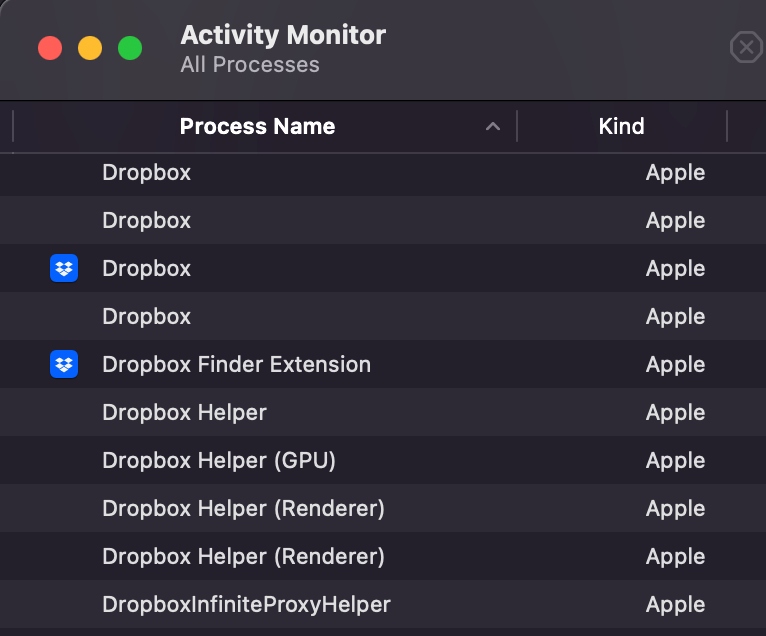 I upgraded to this Beta for the first time today (macOS 12.1), and everything seemed fine for a while until it finished the initial sync (after moving everything to the new place under "Locations"). However, now it's been stuck on "Syncing..." for hours and hasn't synced changed files since then. It isn't showing number of files syncing or anything, just "Syncing...". Anybody know how I can troubleshoot this?

Hi! I just downloaded the same build and it's still Intel. Did you have to do something to switch it?

Hi! I just downloaded the same build and it's still Intel. Did you have to do something to switch it?

No I found Dropbox had updated itself automatically as usual, and I didn't have to do anything.