Hello! As the subject implies, Dropbox is agitating one of the threads of a VM of mine by pegging it to 100%, regardless of whether it's syncing or at rest. I'm running dropbox-headless on a Ubuntu-based headless virtual machine hosted in Linode. My use case is as follows: the VM generates plaintext files, which need to get propagated to other computers. The plaintext generation happens through a script which runs only occasionally. All other computers in the system described are also running Linux, albeit different distributions (all Debian-based) - none of them exhibit this behaviour, though I should mention that they aren't using the headless version of Dropbox, but the regular, GUI-based one. The file count in my Dropbox folder is currently in the neighbourhood of 25k (far cry than the 300k, which I've seen mentioned in Dropbox help pages as reason for concern). The files are around several tens of KB each. The reason for me starting a new thread here is because I haven't found the solution in any of the previous ones (and I've read at least a dozen of them).

For ease of troubleshooting, I'll answer some of the questions I anticipate:

1. Yes, I've seen this page. None of the suggestions there help. No, my Dropbox folder doesn't contain (nor do I have the need for it do so), any symlinks.

2. No, to the best of my knowledge, the Dropbox folder isn't contained in any NAS folder, so I don't think the CPU is paying a network overhead here.

3. Yes, I did try updating dropbox-headless to its most recent version.

Any other ideas? Thanks in advance!

Hi there @Y_Malinov, I hope you're well today!

Just to have a little more info about your setup, can you let me know which version of the app you have installed?

Also, which version of the OS are you running?

Sorry for the late reply. The aforementioned server is running Ubuntu 20.04.1 LTS (GNU/Linux 5.4.0-53-generic x86_64), and I'm controlling Dropbox via the handy Python script linked on your Install page for Linux here. This is the output that the script returns when asked for its version:

EDIT: something else that I noticed is whenever I run "dropbox.py update" it replaces Dropbox's binary regardless of whether there is a newer version available. When that happens, Dropbox stops agitating one of the threads (even though it still runs) for several days, then it goes back to 100% single thread usage again.

Just logged in for some maintenance onto the server and noticed that the median CPU usage has dropped to several % (as it should be). Looking at the historical resource allocation in Linode, I'm seeing this for the previous 30 days: 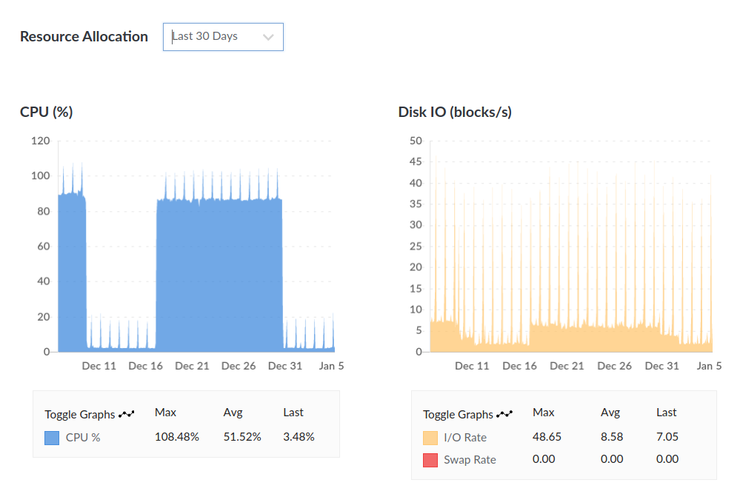 The daily peaks seen are accounted for: it's a heavy script that the server is running daily, at a specific time, for some 15-20 minutes. The rest of the load results from Dropbox, which seems to be hitting the disk heavily as well. Going through the server's logs, I can't see any event suggesting itself as the culprit behind the sudden drops and falls of CPU usage - I can confirm that Dropbox has been running non-stop throughout the entire period. Will post another update if I find any more data points, which might be of use.

Thanks for the update here @Y_Malinov.

There might not be much I could suggest here in terms of troubleshooting if the issue does crop up again, as the setup isn't currently supported for the desktop app (with the VM).

Having said that, I'm glad to hear that there has been improvement there.

Your thread here will remain open in case any users here have some suggestions for the setup you're currently running.

Please do let me know if you have any questions though - cheers!

I think this will be our last update. We've just started receiving notifications of high CPU usage from Linode. Logging back into the server reveals that Dropbox is back to its old ways:

Seeing as how we are at wit's (and patience's) end, we'll be looking into other alternatives: looks like Dropbox, though very convenient, will not be the solution we'll be using for syncing our files. Thank you, Daphne, for the support.

0 Likes
Reply
Polls
Are you starting new work habits this year?
Vote
Hide Results
Well, we know it can be hard to keep up good habits, so we made a new working from home cheat sheet, with some good habits, some things to avoid and some tips for making your day a little easier. Check it out here.