I recently had to restore my Mac from Time Machine, and for some reason after doing this, the main dropbox folder (with desktop, documents, downloads, etc) is now hidden in finder. This is also keeping me from turning on Backup, because dropbox can't actually find the folders.

The folder is still visible in the dropbox application, and as far as I can tell, I can still access all of my files from the finder sidebar, but I would like to fix this in order to be able to have backups of everything. I'm also not sure if the folder being hidden will cause some kind of file mess-up down the line, so I'd like to get it straightened out before anything happens.

Below you can see a photo of my dropbox folder in finder (with hidden items visible). 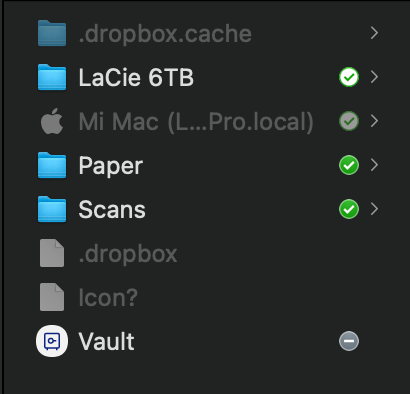 I'm sorry to hear you're having issues with the computer backup feature; let's have a look into this.

To be honest, I'm assuming that this could have been caused by the Time Machine feature, but let's make sure about it first.

Can you please take a look at your account's linked devices and let me know if the one you're using is showing twice there?

Any additional information is more than welcome!

Hi Walter! Thanks and happy Monday to you as well.

I am using two different computers to link files between them (a desktop at work and my personal laptop), but each one only shows up once in that list. But notably, the "My Mac" folder on my work desktop is visible, so you may be right that it had something to do with Time Machine.

I did try and reinstall the dropbox app, but that didn't change anything either.

I was also able to restore the backup capability of the downloads and desktop folders. To do this I went to their pinned locations on the sidebar of Finder and chose "show parent folder". This led me to their dropbox location. From there I copied the entire folder back to it's location on my hard drive, and this allowed me to back up these two folders. It seems dropbox was looking back to that location to try and back up? The original backup error message was something like "the folder isn't in its original location".

I haven't done the same with my documents folder, because I probably have 700-1000gb of data, and not all of it is stored locally (and can't be since my hard drive isn't big enough). Anyway, I don't want to risk anything because my files are pretty sensitive.

When I copied those two main folders (desktop and downloads) it also duplicated all of the files in those folders – so there would be "FileA.jpg" and "FileA (New).jpg". This is obviously easier to manage when it's 5-10 files on my desktop versus 100,000 in my documents folder...

The only other bit of info I have is that I updated a bunch of folders on my work computer on Friday, and only about 30% of the changes happened that night – the rest didn't happen until Sunday afternoon. That may be more of a cache issue than anything though it sounds like?

Thanks for your help!

Walter
Dropboxer
Sorry for the late response here @asakul; are you still having issues with this?

No worries! But yes it's still happening. Any thoughts on a fix?

Walter
Dropboxer
I'll be happy to look further into this for you @asakul.

To do so, may I reach out via email?

What was the solution to this issue?

The solution from Dropbox's end was essentially "we can see the Documents folder syncing on our end, so it should be fine", even though I still can't add the folder to my backups (see photo below). But I am able to access everything from the web and do rewinds from there, so it does seem like it is syncing and backing up.

I just wish that I could add it to my backups in this UI, so I have a little reassurance; I'm kind of afraid to make any changes though because I don't want to risk losing my files. 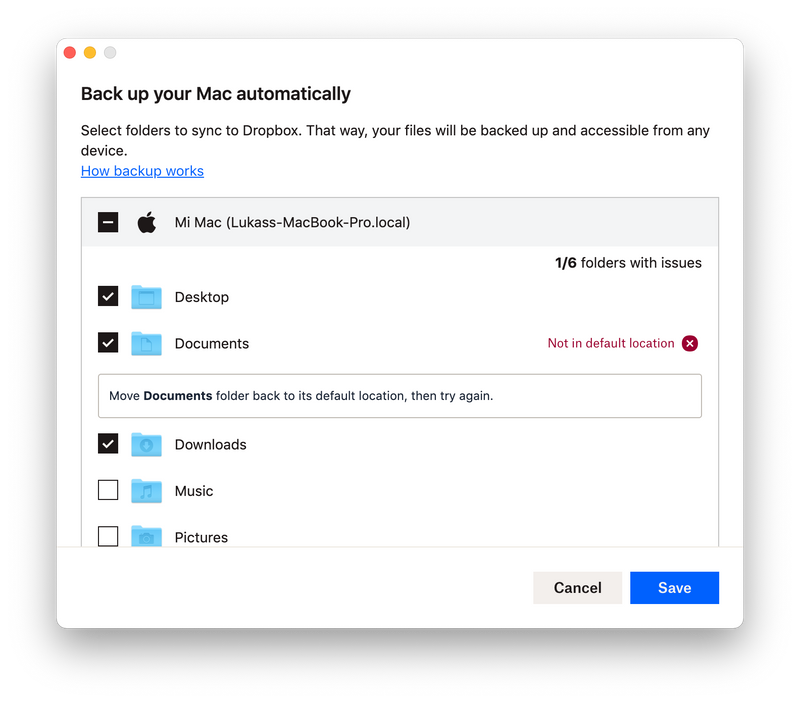