I recently downloaded Dropbox to share files easily from my desktop to my phone, and vice versa.

When intitailly downloading the app, I selected that a dew of my larger folders like downloads, desktop, and pictures would sync, not really understanding how the app worked and what that entailed. I then realized it was syncing almost all my local files to the web and quickly ran out of space on the free dropbox account without me even doing any of the file shares I initially downloaded the app for.

After playing around and not being able to "un-sync" the files, I decided to delete my account and start from scratch. I deleted my account, made another, and unselected the fodlers mentioned above so almost nothing initally syned. I uploaded a few videos, synced accross and worked well.... until now

I dont have a ton fo files on my account, but two folders in particular I use to store my documents, PDF's etc. Right now, there are blue sync icons on the files and when trying to open them on ym computer, It says they are empty/ it won't even open them (but will open others that have no icon or a green).

They arent in my dropbox, and i cannot open them on my computer. I am afraid I lost all of my data in the fodlers in the deletion/sync.

If anyone could help it would be greatly appreaciated!

HI @MattGrebosky; welcome to our Community and thanks for using Dropbox!

Can you please let me know if you've disabled the computer backup feature before you deleted your account and if so, which option did you go with? Did you choose to keep files in Dropbox or on your Computer?

While we're at it, can you send me a screenshot of how this looks like on your end and clarify the app's status as shown within your system tray/menu bar? Is it 'up to date' or syncing?

Regarding your missing files, did you take a look at your computer's recycle bin/trash can? Can you see any sign of them on our website?

Any additional information is more than welcome, Matt.

thanks for the amazing repsonse.

In regards to the backup, I don't beleive I changed anything from the set features when I first downloaded the app, so whatever it was tradationally set on.

In the picture, I beleive you can see the tray, the various folders that are hav the blue, still syncing icon.

But!!!! I may have found all the old data. Not very tech savy so excuse the terms I use.

I opened up this weird dropbox (old) folder and i think it has all the stuff I couldn't find before. How can i keep this from deleting? It just very strange to me that its in there, but i cannot open any of my old folders that had all the data in it.

I cant find them on the website nor in the trash . 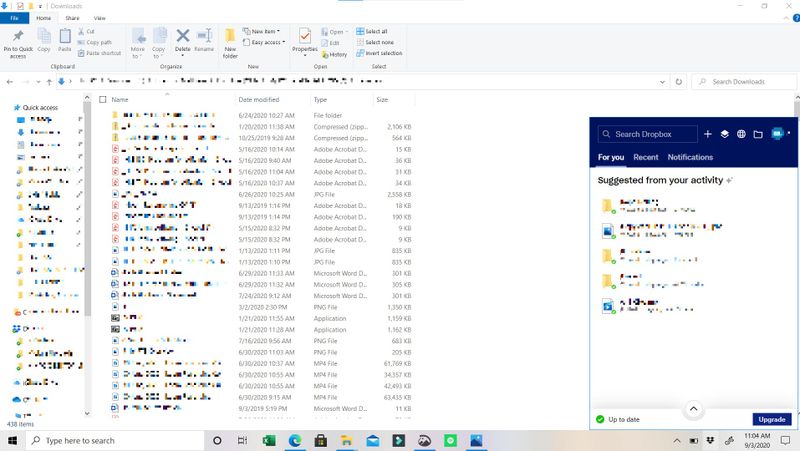 @Walter if theres any chacne you could help with the above? Unfortunately, one of my most improtant files, a recent podcast i recorded on zoom, is no where to be found. Woudl love your help!

Hi @MattGrebosky, as you deleted the old Dropbox account, then created a new one and signed into it in the desktop app, the old Dropbox folder was renamed to the one you have there now in the image. It won't sync to the Dropbox site, so you can move the files to another location if you wish to keep them safe.

If there were files in those folders that are missing, then it wouldn't be possible to recover them from the Dropbox site, since you've already deleted the account.

However, it might be possible to recover the files from the local machine from the recycle bin, or using a third party app or service to do so.

0 Likes
Share
Reply
Polls
Are you starting new work habits this year?
Vote
Hide Results
Well, we know it can be hard to keep up good habits, so we made a new working from home cheat sheet, with some good habits, some things to avoid and some tips for making your day a little easier. Check it out here.