Ever since updating dropbox many months ago (back in 2019 I think) I've experiencing this timestamp bug:

Opening a subfolder often (but not always) causes the parent folder's timestamp to be updated to the current time. I have to stress that I've done nothing to any of the contents within the parent folder or its subfolder other than to open the subfolder and look inside. Since nothing has changed within the folder clearly the timestamp should not be getting changed. This behaviour only ocurrs within my dropbox directories. It doesn't happen within other folders on my OS X drive, so this is definitely a dropbox issue.

Obviously this is a problem because it basically makes folder timestamps useless within dropbox. Months ago I brought this up with dropbox tech support and the agent claimed that this is normal, but frankly it seemed like she just didn't care to understand the actual problem. At the time I was suffering from much more serious smart sync issues so I let this go hoping that a subsequent update would solve it. alas, no.

Why does dropbox make these arbitrary folder timestamp updates? Is this how dropbox is intended to function? How can I prevent this timestamp corruption in favour of the standard functional OS X timestamp behaviour?

Hey there @alex g.33, thanks for reaching out!

You can check out some more info about this here. This is a system file that the desktop app ignores, and it's not synced by the app.

When you notice this behaviour, is it for a folder that you may be opening for the first time? Does it happen if you open the folder again another time?

Looking forward to hearing from you!

You can check out some more info about this here. This is a system file that the desktop app ignores, and it's not synced by the app.

When you notice this behaviour, is it for a folder that you may be opening for the first time? Does it happen if you open the folder again another time?

@Daphy As I mentioned both here and to the dropbox support tech, I have never observed this to occur outside of my dropbox folder. So in my experience it appears to be an issue that's specific to my dropbox directories. I really don't appreciate when you point the finger at a third party rather than addressing the actual problem. It would be great to see dropbox assume responsibility for how its product interacts with the operating system.

That said, dropbox folders are much more likely to be "new" and "opened for the first" than other folders on my drive, especially since dropbox's introduction of smart sync. So it's possible that this problem arises when an "online only" folder (which appears in the finder like any other local folder) is opened -- maybe the mere opening of the folder causes dropbox to initiate a cloud download and that results in a timestamp change? This would indicate a problem with how dropbox interacts with OS X, because it's clearly a confusing and unintuitive behaviour. In this case it would fall to dropbox to develop a proper integration with OS X so that this doesn't happen. (Maybe if you did sync the .ds_store files this issue be mitigated?)

Re your other question: I don't know if the timestamp behaviour is limited to folders I'm opening "for the first time". These are all folders I've created, so I've obviously opened them many times before and I'm not in the habit of second-guessing what's going to happen when I open a folder and whether the 100th time I open it might for some reason become "the first time". In short: I use dropbox to make my life simpler, not to make it more complicated.

Are you telling me this frequent unexpected updating of date-modified timestamps is normal within dropbox folders?

If so, does dropbox have any plans to solve the issue?

If not, what can be done to solve it in my case?

Hi @alex g.33, just to be certain, what specific timestamp are you referring to on the folder, is it the creation date, modification date, or last accessed date? The columns in Finder can vary depending on the folder you're currently viewing.

Could you attach a screenshot showing what you're seeing in order to assist further?

In the example attached screenshot you can see that one folder (call it folder "A") was just "modified" and is now at the top of the list. This occurred after I opened a subfolder within it (folder "A1"). To be clear: First I opened and closed the folder A and its Date Modified remained unchanged (everything good so far); then I opened and closed subfolder A1 -- immediately the Date Modified of parent folder A was updated, although the Date Modified of subfolder A1 did not change. So it appears that opening the subfolder caused the parent folder's Date Modified to change. I have never seen this happen anywhere outside of my dropbox folder, but within my dropbox it happens frequently. 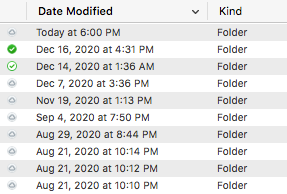 Thanks for the info, I'd recommend getting in contact with the support team directly for them to investigate this matter further.

Jumping on the thread, so's to hear about the outcome.

I'm a musician, sharing Logic projects with others.  Imagine my surprise to learn that all the folder-level timestamps differ between us.  It's only when we drill down to an actual file in the project that the timestampls line up.  I would imagine this same problem exists for other DAW-project users -- since DAWs tend to structure the project as a special kind of folder that launches the program rather than opening the folder.

Is there a suggested workaround for this puzzler?  We've been stepping on each other, not realizing that the top-level time/date stamps are wildly out of sync between us.  Should we zip the project before saving the project to Dropbox?

@BradAndMac  It's been torture trying to get info from Dropbox about this issue. IDK why, but they are very reluctant to provide clarity. I'm currently in a discussion with DB support and I've had to ask the same questions 3 times -- still waiting for a complete reply.

Based on their partial responses so far, my impression is that this is normal behaviour for Dropbox on Macs (no word re other systems), DB doesn't consider this an issue, they have no advice for mitigating the problem, and they have no intention of investigating any possible solutions.

Thanks for bringing up the DAW case. I'm going to be collaborating on a video project this year and that will likely raise the same problems. For me transferring zipped archives wouldn't be a viable solution for sharing project files. That's no better than using yousendit.

I'm starting to think this is a case of Dropbox wasting its resources on developing pointless new features while neglecting its core competency.

@BradAndMac My guess is that if you're collaborating on a project and you need to see what files have been modified then you have to keep all project files within one single folder with no kind of structured heirarchy. --not really an option for anything but the most basic projects.

I wonder if something like GitHub or GitLab might work for the DAW use case. GH isn't really intended for media projects but I've often wondered about using it for graphic design projects and it might be worth a try if you're familiar with it.