I am a graphic designer and I have a large folder of font files that I keep on Dropbox. I was trying to download some of these fonts today, but for some reason none of them would install on my computer. I tried in both FontBook and Typeface app (the latter being the font management apps I use regularly). I assumed that some of these fonts were corrupted, but after investigation, I realized that when I download a font folder, it automatically creates 2 versions of each font file within the zip. I have folders as normal, but all the font files are Unix. Within the zip file, I now also have a new folder titled "_MACOSX." Also, the Mac fonts have been renamed automatically-- for example: "FuturConBol" is changed to "F._uturConBol" in the MacOS folder.

Now, none of the fonts will import into either font management program. Is this new functionality? Why is this automatically happening?

Attached are some screenshots, hope they help make sense of this. 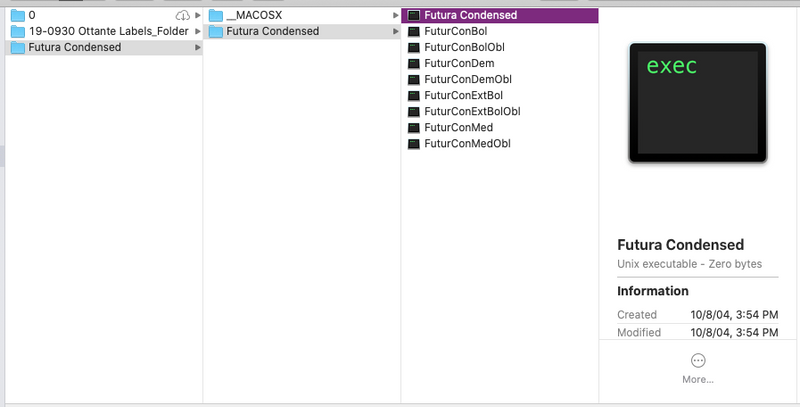 The Unix version of the font -- will not install on Mac

The apparent Mac version of the font

Re: Font files being automatically duplicated, converted, and corrupted?

Hi @CamBB; thanks for posting on our Community!

I believe the issue you're seeing is related to the nature of the files in question and the file system of your computer's OS, but let's take a further look into this first.

If it's not too much to ask, could you run some tests for me please?

First, I'd like you to download this specific folder from another browser, and, then, use a different unzipping (un-archiving) app to see if that improve matters.

You can also find more information about this using a web search for Apple's double files.

In any case, please keep me posted on your findings, Cam.