I just lost over 50TB files from only one folder??? Rest of account untouched. Rewind doesn't work

Jenny S.21
Explorer | Level 4
A several weeks ago I got message saying a couple of thousand files were deleted. I took option to restore all. Thought no more about it till yesterday when looking at folders of photos and found random subfolders reported 'Folder is empty'. Too late to try to restore again. I've got them elsewhere so I think I can recover. I'm using Dropbox from windows 10, and IOS. Is it a syncing/file indexing issue? Power of Dropbox is use on several devices and increasing number of apps allowing updating. So I guess a nightmare to ensure integrity.
16/12/2017
0 Likes
Reply

I am having the same issues. For some reason files and folder are deleted and I see large number of files showing as being updated. The icon with the number that display the number of updates is over 800 files. Very strange.

Could it be that I have a virus?


I am having the same issues. For some reason files and folder are deleted and I see large number of files showing as being updated. The icon with the number that display the number of updates is over 800 files. Very strange.

Could it be that I have a virus?

Hi Daz, based on what tech support told me the issue (at least for my case) was the Dropbox mobile app where the synch between that and the online server caused the deletion. It's really strange that the mobile app worked just fine for 4 years through upgrades and phone changes, but anyway...I have deleted Dropbox from my mobile since my problem occurred. Tech support reinstalled all the deleted files in my Dropbox cloud and I am using dropbox only online or from my desktop now.

Jane
Dropboxer
Hey Daz,
Welcome to the Dropbox Community, let me send over some tips below regarding your inquiry and we’ll take it from there!
SKBJ ‘s reply could point you towards the right direction, though you may need to dig deeper, depending on the behavior you’ve noticed.
Firstly, as Dropbox syncs any files added to it, a virus or malicious software would get updated to all computers linked to the account accordingly. If the virus or malicious software is in a shared folder, shared folder members and computers may also be affected. That being said, I’d strongly recommend removing it as soon as possible, as it’ll definitely create more issues in the long run.
Secondly, it recently came to attention that connecting or pointing external locations (i.e. Symlinking them) to your Dropbox folder might cause unexpected behavior, so it may appear to you as if files are randomly deleted. That being said, I’d advise you to have a look intro this as well, just as a possible scenario.
Regardless of the cause, if you need further clarifications or you’d like your account reverted back to a particular point in time, my advice would be to reach out directly to our team, who’ll guide you through the necessary steps and actions you’d need to take, so as to revert back to normal operations.
If you decide to go per my advice above, you may keep in mind that I’m always here to pursue a resolution, so please let me know a ticket ID I could reference in your next reply.
I’m looking forward to hearing back from you on this discussion!

DON'T WASTE YOUR TIME TRYING TO GET HELP FROM DROPBOX.

I provided coherent descriptions to 3 or 4 different "I want to help you..." tech support people, each of whom I either never heard from again, or who responded in ways that indicated that they had paid no attention to what I had reported or asked.  The extent of their incompetence would have been comical if I hadn't been terrified I'd lost data and what remaining I had might not be safe (disconnect from Dropbox for fear the system is randomly screwing things up?)

Literally, after weeks of attempts to get them to trace down why critical data had been inexplicably modified with no action by me (at 3-4 am my time, with all my devices powered down and disconnected from the web and me asleep...), NOT ONE COHERENT RESPONSE.

Then, after weeks of frustration, and no help from Dropbox, the folders/files that had been altered/moved by something/someone other than me (and my devices...), magically appeared to move themselves back to where they had been.  But, I, because of dropbox's incompetence, to this day I have no way of knowing if anything was lost (I have a huge subdirectory tree, with thousands of folders and tens of thousands of files...).

CONCLUSION:  data is not secure on dropbox -- workable as a daily backup and web accessable storage mirror, but NOT SAFE FOR SAVING/ARCHIVING ANYTHING YOU CAN'T AFFORD TO LOSE.

I will be arranging an archivable backup separate from Drobox.

I am having the same issues.  It all started after I did the update promising "SmartSyncing".  What a joke.  They 've never been able to get my files restored on my work computer for months.  I got a total runaround from different tech support personnel.
Seriously, everyone needs to reconsider using this platform until Dropbox makes it work.  They are releasing sub-beta code at this point and not providing anywhere near adequate tech support when problems emerge.  You can lose data and not even know what you've lost, as this person says!

I'm quite pissed too.

I was finally going to get back into writing my dairy on Handy Dairy and wanted to revisit my previous entries. Gone. All gone and there's no way I'd simply delete my only backup to my year's worth of memories.

Wew I regret not making a copy and giving dropbox my trust. I'm currently contacting support. Report for file recovery has a mandatory for a link to your events. I waited 20 minutes to load my events and it's loading as I type. I had to resort to reporting problems for others 😕

In my case it's only 1 file or something. I just hope they actually find it and recover it somehow. Even if it's magically without giving me a proper reply. I'll just probe them every 3 days or so haha.

I'm worried I won't be able to get back my Dairy entries since I'm just a free user. And have to probe as hard as Watts H. to find out that I can't get it back wew. I hope they get it back for me soon or something hahaha wishful thinking amirite

Been through the emails and all and it seems like they recovered my files. Luckily enough they could restore my backup. The scary part is if you're like Watts.H where he has thousands of files missing.

This was what they requested when restoring my files:

In order for me to investigate this issue further, can you please kindly provide me with the following information:

So yeah. If you have multiple files, unless you can remember their name, it seems like you're gone. Cause luckily enough the app zips it up as "diary_backup.zip" which makes it way easier for them to restore.

The date I just gave a random one all the way back from 1/1/2017 since I didn't delete any files and that was around when I last remembered using it. Without those it's probably a good luck but yeah. Lucky me I guess?

A shout out to Kate who handled the ticket and Samuel who restored my files. Good luck to the rest of you guys

Jane
Dropboxer
Thanks for keeping us updated on the progress here sibu12345, we’re glad to hear that this has now been resolved for you & you got your files back. I’ve made sure to notify my colleagues on your positive experience & the shoutout here.
Please feel free to check back with us again here at any time if you have further inquiries in the future & I hope you have a wonderful weekend ahead!
[This thread is now closed. If you're experiencing a similar behavior, feel free to start a new discussion in the Find Answers section here. ]

I just lost over 50TB files from only one folder??? Rest of account untouched. Rewind doesn't work

I have a Dropbox Business account and logged in today to find I'd lost over 50TB worth of files (within sub folders) from one of my team folders. Everything else seems untouched.

I tried the folder rewind function and it didn't work. Even if one of my team had accidentally deleted the files they should still be recoverable with the rewind function.????

One of my linked iMacs has 8TB in the "old_files" folder in the cache which were synced to that drive, but obviously not accessible now. 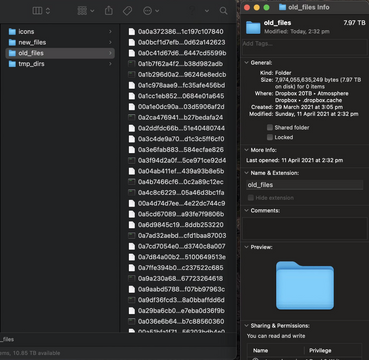 And the insights tab clearly shows a severe drop in used space; 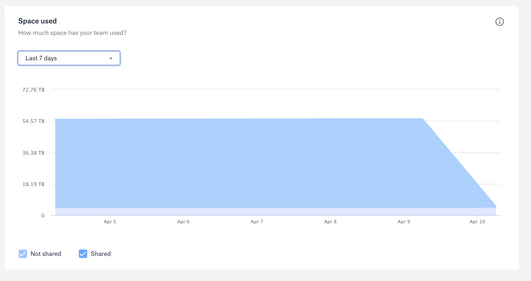 It is impossible to contact support on the weekend, the closest I got was to a sales rep who was very dismissive, and I think may have accidentally swore at me; 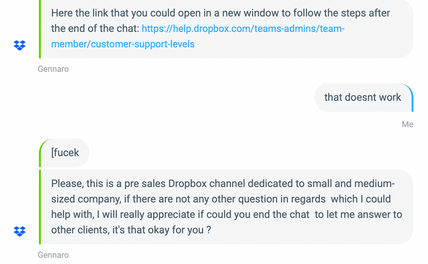 This is so frustrating, not only to lose the files, but to not be able to contact support on the weekend. My business relies heavily on this folder and I am desperate to recover it ASAP.

Has anyone else experienced disappearing files like this? How did you recover them?

1 Like
Reply
Poll
Do you work or study in the creative industry? If so, which area?
Show Choices
Hide Choices
If you use Adobe, don't forget to check out our latest integrations update here.