Remove files from dropbox without removing them from PC

So last night I somehow managed to set Dropbox backing up my entire PC. I'd no intention of doing this and immediately paused sync (as I've not enough space in my Dropbox for an entire computers worth of files). All I wanted to do was share a single file between two computers and now it’s trying to do a backup of my entire computer.

I’ve since been trying to undo this action, having only managed to make it worse. When I open the Dropbox desktop app I have the option to delete file from Dropbox however this deletes the files from my computer as well (so far, I have lost downloads and desktop to this mistake).

What I want to do is empty my Dropbox of this PC backup without deleting the corresponding files on my PC. I’m finding only contradictory advice on forums so far, the Dropbox chat-bot is absolutely useless and I’ve wasted 3 hours this morning trying to find a solution.

Can anyone help me undo this? 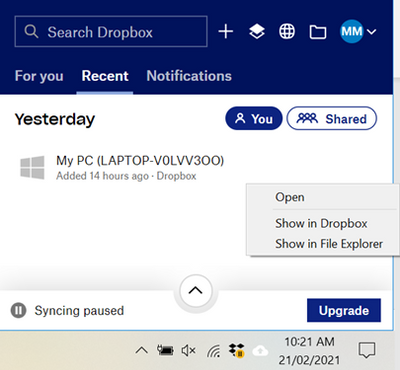 Hello @MattRNR, sounds like you have accidentally enabled the Dropbox backup feature. In this case Dropbox starts syncing your Desktop, Downloads, Documents and other folders as you have chosen during the setup process. Before you do anything, it is recommend that you make a backup of your computer if that is possible. Then in order to disable the backup feature, you open the Dropbox preferences (click the Dropbox icon in the Windows taskbar tray area -> click the account/profile icon on top right -> select Preferences), then go to Backup tab, and choose manage backup. There you can uncheck the folders you do not want to backup or you can uncheck your whole computer. Then in the next step you select Keep content in folders in this PC. Click Stop Backup. That should leave the files only in your computer and delete them in Dropbox.

If you do not enable Dropbox backup feature, it will only sync the contents of the Dropbox folder (by default it is in your home folder). Whatever you put inside the Dropbox folder, only that will be synced. I guess that is what you want.

Regarding the lost files, you can check the events log https://www.dropbox.com/events and click over files you want back, you maybe able to download them without restoring the whole PC folder.

Sorry for my delayed reply

I gave your advice a go and it seemed to work perfectly up to this point:

However as soon as I unpaused syncing it just went back to backing up everything all over again and gave this error message; 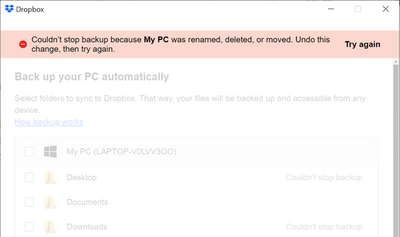 Walter
Dropboxer
Sorry to jump in here, but have you ensured you disabled the computer backup feature through the app's preferences, Matt?

Please jump in, the more the merrier.

No I've not disabled the backup, that is what I'm trying to do.

So, as per Elixir's advice, I click on the Dropbox icon in the windows taskbar and go to my profile (through the 'Access and manage your Dropbox settings' icon), then I select 'Preferences', navigate to the 'Backups' tab and select 'Mange Backup'. This opens a dialogue box entitled 'Back up your PC automatically', in this dialogue I deselect everything and click save which opens another dialogue box entitled 'Stop backing up 5 folders?' in which I check 'Keep content in folders on this PC' and then 'Stop Backup'... At which point I receive the following error: 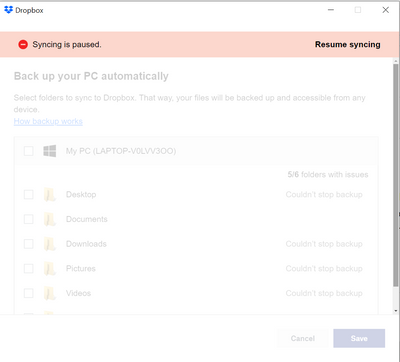 This is where I am stuck...

Daphne
Dropboxer
Can you just clarify for me @MattRNR, where did you delete some of the folders that you mentioned from?

Was this via the desktop, or through your account online?

Have you since restored the files that you deleted? Eg. if you deleted the files locally from the computer, you could check the Recycling bin to see if you can restore them first.

To be honest, I can't remember from where I deleted the files.

I have, however, been able to restore them for the most part now using a backup, my downloads folder is missing still but it was empty anyway so that is not a problem for now.

Where I'm stuck is in disabling the continuing backup due to the error I receive (see my response to @Walter above) using the method that @Elixir provided earlier. Every time I unpause the sync the backup just keeps on going.

Sorry it took me a while to get back to you, I had a bit of a chaotic weekend.

In this case, I would suggest to unlink your account from the desktop app, which will automatically disable the backup feature.

If the Desktop/Downloads/etc folders still show Dropbox within their folder path, we can then reset them manually with these steps before signing back into your Dropbox account via the app.

I can't claim to know whether I have followed your instructions exactly right but whatever I've done seems to have worked.

I have manually changed the folder paths (I think) and set up Dropbox from scratch (I think). So fingers crossed.

Thank you so much, really appreciate you're help, this was doing my head in.

If I come unstuck again I'll let you know.

Wishing you a great rest of your week Matt!