Rename the "My Dropbox" folder

Rename the "My Dropbox" folder

I would like to rename the "My Dropbox" folder on my Windows 10 laptop. It is a personal account.

I've been using WSL a lot lately and often forget to quote the path, which needs to be done because of the space between the words. I saw the "move" option, but it says that it will create a My Dropbox folder, so it doesn't help.

There is a lot of data in the folder and it's an old account.

I was thrown off by many of the help responses because they say that the folder must be named "Dropbox", and mine isn't. I guess those are referring to the parent folder?

The Dropbox folder should indeed be called just "Dropbox", so that does sound a little strange.

Can you send me a screenshot of how the folder appear in your File Explorer?

Are you perhaps using another third party app to sync your Dropbox account to your computer?

Looking forward to your reply!

I'm surprised it sounds strange that that's the name. I attached an image from the "Dropbox folder location" dialog that indicates that "My Dropbox" will be the name of the folder. I guess that's why I mentioned that it's an old installation, thinking it's preserving an old standard.

No third party software is involved, and Dropbox indicates that it is up to date, 117.4.378. Syncing is working fine. I just want to rename it. 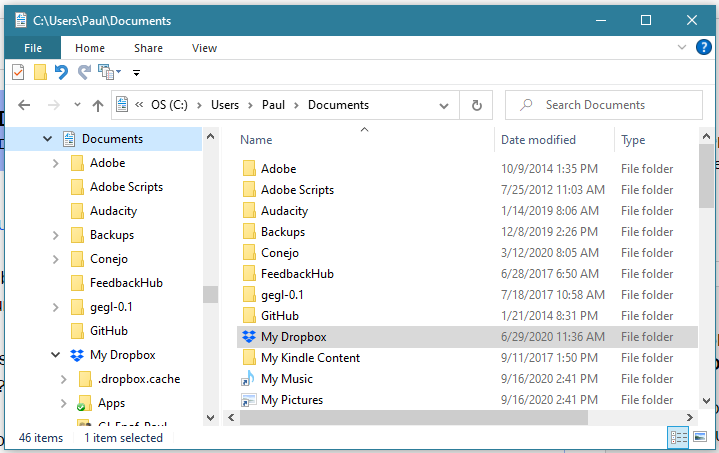 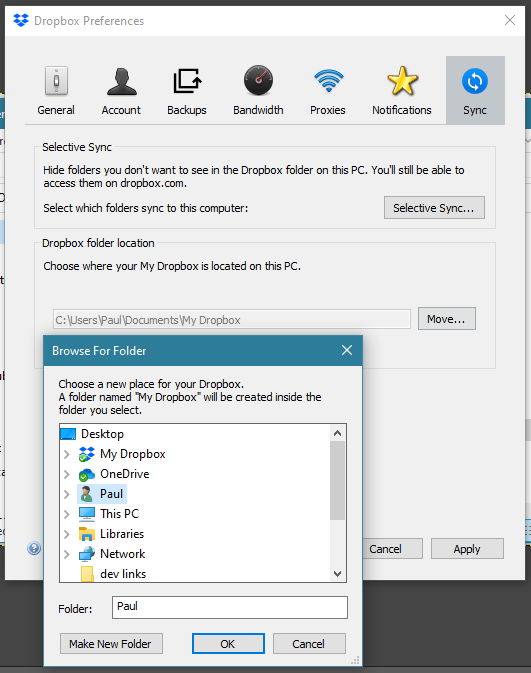 May we reach out via email to have a further look into this internally?

Sure @Walter. I don't know the rules and details in this forum, so if you can start an email thread, feel free.

Walter
Dropboxer
I just sent you an email to the address that's associated with your Community's profile @OPunWide.

Whenever you get the chance, please have a look at your inbox and we'll take it from there.

I did a couple of back and forth emails, and then no response. He did say they were very busy, but it's silent for too long, so I'm back here. I was also afraid this thread would auto-archive if I didn't add something to it.

So far I've unlinked and then reconnected. Fortunately I didn't let it pick its default installation location and instead tried to get to my existing one. During that process it always said "this will create a folder called My Dropbox, making the path....".

What follows this paragraph is a big part of my last response (other than a "hello?") using email. I can't solve my question by testing it because I don't have another computer or another account to use. I definitely don't want to risk having my files get screwed up if the experiment didn't work. Now I'm asking the community: Do others always see this warning no matter what folder they choose, as described below (and shown in the image in the earlier post)?

The issue that keeps getting ignored is that Dropbox says it will create a folder named "My Dropbox" below the location I choose. It says it in the Move dialog and in the Link dialog. I don't want to go through the rename just to find out the DB will then create another "My Dropbox" that I have to use below the location I pick. I don't want to risk it getting confused and deciding that I deleted all my data, so the .com location should too.

Is my system the only one with this dialog? That's hard to believe. Have you seen these dialogs?

Jay
Dropboxer
Thanks for the details, we've passed your comments along in the email ticket.

The support agent will investigate from there on, as it is with a specialist team.

0 Likes
Reply
Poll
How do you get refocussed while working from home? Do you find any of these options keep you from getting distracted?
Show Choices
Hide Choices
If you’re looking at this thinking ‘None of the above’ then you can check out our helpful focus tips here.