Severe Syncing Issues - End of Dropbox forever if not fixed.

Severe Syncing Issues - End of Dropbox forever if not fixed.

This, is the most ridiculous **bleep** I have ever encountered in my life. I can't even use dropbox anymore to share files because if I do, Dropbox tries to upload ALL FILES SIMULTANEOUSLY and causes EVERYTHING to shut down, my entire network crashes. I'm on 1.5Mbit DSL, and Dropbox has multiple severe issues with networks that need to be addressed.

1) Dropbox settings for bandwidth limiting do not function at all. The settings do NOTHING AT ALL.

2) Pausing does not work, Dropbox continues to use the network even when paused, you must force exit the application to shut down syncing. Pause is not possible for over a year now. Possibly even two years. Lemme check, I complained about it before. Two years. Yep.

This is the final straw. If Dropbox cannot solve this issue, I will be leaving. I used to pay for dropbox till they stopped fixing these issues, I stopped paying Dropbox because the price was too high, and they weren't doing anything at all to help with the problems. The **bleep**ty interface Dropbox has now is just terrible, I hate it, its one reason that lead to me no longer paying you guys. Now your program shuts down my entire god **bleep** internet connection to all devices in the house to upload a few files. I fixed this issue by removing all the still syncing files, and placing them in there one at a time. One by one. Each one finishing within seconds that way. But I tried to drop 5 in there at once when I saw each one continue to finish instantly, and then 3 of them finished instantly while the other two shut down my entire network again. I removed those two, fixed my network, placed them both in one at a time and suddenly they both finish in seconds. Holy **bleep**. Seriously?

Yes, I am VERY ANGRY. This is serious, and extremely bad for your platform. Dropbox was supposed to be a good cloud service for backing up my data and sharing data with my friends even when my connection wasn't fully working well but now your service is so terrible that trying to sync a few things crashes fking everything and I can't even contact support, left with a **bleep** bot to talk to or the community only. Don't give me this **bleep** about "Oh well your connection is slow so f you", very clearly several things here are VERY broken. Case and point, #1 and #2 for sure.

And yes, I can confirm Pause no longer works, because I have a meter on my desktop screen that shows internet usage activity, and dropbox shows noticeable activity when uploading. Pausing doesn't even effect the graph at all. Forcing Dropbox to exit, reduces the line to zero. So that absolutely 100% proves and confirms Dropbox cannot pause for TWO YEARS now and the bandwidth thing hasn't even worked since then either. I can't have dropbox using the internet connection between certain times of the day, nor can I have it crashing the entire network every time I wanna share a few files. This absolutely, must be fixed.

I understand your frustration over this matter.

The way the Dropbox desktop application syncs is one-by-one, and it should follow the bandwidth settings and pause option.

I've attempted to find a "check for updates" button or even auto update settings but I can't find any. Which reminds me, we need settings to disable automatic updates on Dropbox. This is very important. I can't have Dropbox decide suddenly to download an update during work hours. I have Windows and all other applications that I am able, set to manual update mode so that I can update them on weekends.

Jay
Dropboxer
Currently there isn't an option to prevent the app from auto-updating. If you wish, you can suggest this change for others to vote on, so the dev team can look into this in future.

Regarding your app, it looks like you're running the beta branch of the app. To install our latest stable version, visit this page and switch ‘Early releases’ to Off.

Afterwards, re-download the app from here, and then reboot the machine.

When was the last stable version released? As I said, I've had these issues for 2 years. The same old issues, for two years. It can't be just this last release.


When was the last stable version released? ... edit; Ugh, another online installer instead of offline installer.

As you can see here, when Dropbox begins uploading, you can tell its activity in my network meter, and then you see here that Tresorit lost connection. I tried to refresh this page to reply, and it failed to load instantaneously. After the upload in dropbox completed, everything came back online. This is using the most recent stable version, 118.4.460. 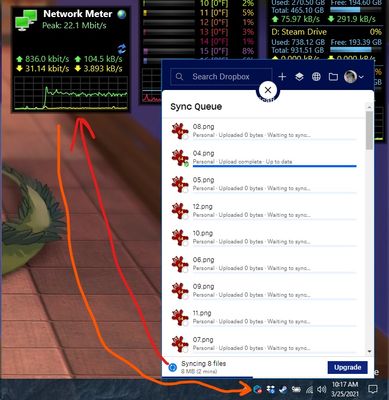 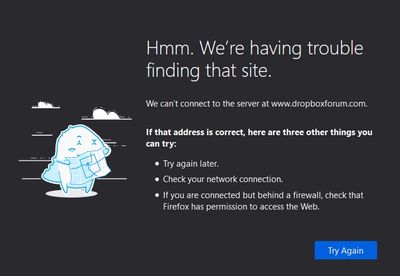 Jay
Dropboxer
You haven't mentioned to what limits you restricted the Dropbox app bandwidth in the desktop app, only that your connection could only support 190KB/s down and 50KB/s up, could you attach a screenshot showing that?

The app in the screenshot also doesn't show the exact speed the Dropbox app was using, which you can usually see by hovering over the Dropbox icon in the system tray.

The speed was consistent with the one in the bandwidth graph.

I have tried various different speed limits. I've set up and down speed to 50, no change. 25, no change. 10, no change. 1, no change. Trust me, I've tried a lot. I've hit apply after every change. Since those rates are broken I just set everything back to no limit, but you can see here where its still got the greyed out values of my attempted changes.

.... Your system cut off the other half of my message. Ffs. I'm not retyping the other paragraph, screw that. 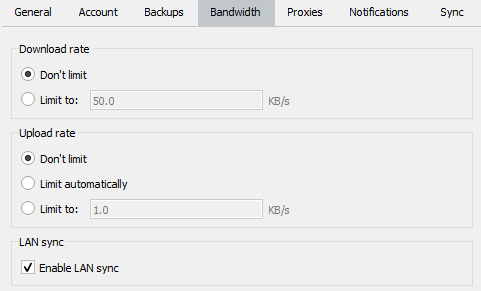 Jay
Dropboxer
In general, if you have it set at no limit, this will affect your connection if your speed is low, as the Dropbox desktop application will try to use all available bandwidth when syncing.

Could you forward screenshots showing the Dropbox bandwidth at a limit of your choice, and also the current speed of the app when hovering over the icon at the same time as when you're syncing files to look into this?