Re: Where is the pause function on the desktop app? Can we revert it?

Re: Where is the pause function on the desktop app? Can we revert it?

I too need the Pause feature on Dropbox.  Hard to believe it was removed!  Please bring it back!!  Thanks

Currently you can only pause syncing for 30 min, 1 hr or until tomorrow. Please bring back the option to pause indefinitely.

This is what I got from Costumer Support:

Thank you for contacting Dropbox Support. My name is Kendall and I am a member of the Dropbox team.

If I understand correctly, you would like some clarifications on the pausing options for the Dropbox desktop application, correct?

As I do understand why you'd want the option to pause indefinitely, the option is no longer available with Dropbox.

The reason why this option is removed, is because when syncing is paused, the Dropbox icons do not appear and changes made to files online, will not appear for you, therefore the changes made will not be immediately available when you un-pause syncing.

I will make sure your comments regarding this will be passed along to the team as feedback.

If you have any further questions, please let me know.

I will be more than happy to help!

Looks like this is not going to happen guys. Time to start looking for another provided. I hear MEGA is pretty good.

If I didn’t have to google this problem, I wouldn’t have found out about the shareholders’ lawsuit against them. They’ve lost me over $12/share since I bought in at their IPO. Clearly they don’t care and don’t even bother to answer to their shareholders.
1 Like
Reply

Please do a favor and respond back to Kendall.  Pretty sure he and other Dropbox personnel are actually following yet ignoring this thread but this "answer" needs a response.

There MAY be a reason why Dropbox stopped the idefinite sync functionality but it IS NOT:

"The reason why this option is removed, is because when syncing is paused, the Dropbox icons do not appear and changes made to files online, will not appear for you, therefore the changes made will not be immediately available when you un-pause syncing."

Anyone who ACTUALLY USES DROPBOX knows that there is no difference in functionality between any of the NOW 3 choices and the previous INDEFINITE !   FIRST:  The Dropbox icon indicators regarding PAUSE (orange circle with pause symbol) or in process (blue circle) or Up to date-syncing  (white - no circle overlay) are the same no matter.  One would have to wonder what other related Dropbox icons there are because in my years of use I have never seen any.  SECOND: "changes will not appear" or "will not be immediately available when you un-pause"  just ridiculously UNTRUE statements!

I have 2 different jobs. I actually "push the envelope" with large database syncing in both job types.

One is a single client job where I employ 3 people so the 4 of us share a custom Access database.  We maintain strict communication with each other so there is never more than 1 person in the database at once because that will naturally confuse a syncing program and cause a conflict file. We sync and then pause the file to do our work. Then sync when done and next one in does their work. Yep, every once in a while we end of with a conflict file but it has been handled well by Dropbox and no problem to manage. THERE HAS NEVER BEEN A TIME THE FILE DID NOT SYNC IMMEDIATELY!  Sometimes we are on the phone with each other at syncing time so we KNOW that is a fact. The only delay is how fast our individual internet speeds are and I am the slowest because I travel and use a jetpak with NO PROBLEMS. No problems that is... as long as we can sync indefinitely so we are in control of exactly when we want to sync.

The other job involves the use of QuickBooks with my tax clients who do their own accounting.  That is a bigger problem to control now that Dropbox will not sync INDEFINTELY because I am not in constant communication with these clients.  And yet, we are ok simply because they turn their computers off at night which means that stupid "Until tomorrow" pause function does not automatically sync when I am working in their Dropbox shared QB files.  Again though, we are usually in communication when we sync back to each other and the only delay is who has the slowest internet signal.

If there had been a delay in syncing as described in Kendall's reason during all the years when INDEFINITE SYNCING was happening, there would have been bunches of complaints, but I see no history of that. There might be personal preferences for some who might want to pause syncing but were not smart enought to remember to turn it back on but there was not the amount of pushback that is happening now for the multitude of us who NEED INDEFINITE SYNCING.

Randall is incorrect. It is fairly obvious he has not had any real live Dropbox experience himself.

Dropbox is doing a huge disservice to customers by preventing INDEFINITE SYNCING and by not directly communicating with an answer to this problem.

Really need the option to pause syncing for an indefinite period of time. This was removed in the latest update.

IT'S back 🙂 I just went to pause and now have: 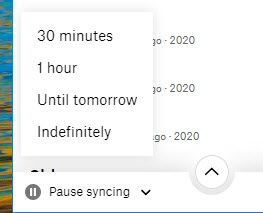 Thanks so much for returning this required functionality.

Should have NEVER been removed!

@mewhois is right, it's back for me too! Hopefully all the commenters here see this update.

I still think it's one too many clicks to get to (I don't see the value-add in the additional click to choose a time period, by "pause" I mean "pause", no length of time necessary) - but I'm glad it's back.

It's good that they have fixed it, but sadly it's too late for me.

Because of their poor customer service, I'm leaving.  The way they dismissed it, lied, gave false & contradictory advice instead of just saying "you're right - we're working out how to fix it".  It's a company I don't want be part of.

They used to be so good, innovative, neat.  But now I associate the product with scope creep, keeping up with the competition, bloatware etc etc

I'm moving my documents into a 100GB OneDrive for £1.99 a month - admittedly not much better, but far cheaper for what I need.  And I bought a Synology NAS for my 1TB+ of photos and software - I'll do offsite mirroring that way.