I have noticed that my starred items only seem to show up in certain situations in navigating in DropBox.  If i am in the home folder, which i rarely am i see my starred items at the bottom of the screen.

I think it would useful if two additional entries were made on the side bar below:  Starred and Followed. This way they are always visible regardless of which view i am in. 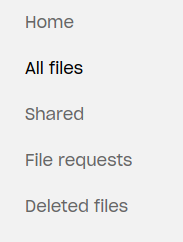 Hey @tom_bah; thanks for using Dropbox!

This idea is going to need a bit more support before we share your suggestion with the team.
I updated the status here to encourage more users to back you up!
Status changed to: Gathering Support

Currently, Dropbox defaults to showing the file list first in the app and thus the user must click 4 times (once for the menu, once for "Home", once for "Starred", and once for the folder/file desired) to reach the intended starred folder or file, which is very tedious, relatively speaking.

This poorly designed process/interface eliminates most of the value of even having a starring/favoriting system. If you can't access the starred items fast then it doesn't have nearly as much value as it would otherwise. It only acts as a bookmarking system now mostly. It barely ever speeds anything up and is not easily/clearly accessible enough.

It should require no more than 1 to 2 clicks to ever reach a starred folder or file, otherwise they essentially don't even function as shortcuts most of the time.

Thank you for your idea, while we can’t take every idea forward we do regularly re-review and will update you if anything changes!

Status changed to: Not for right now

Bring back the green 'synced' checkmark in the system tray.

Can we have different plans / price points / data combinations?