That you're forcing us to come here and vote on a feature that you should be EAGER to do is a joke. This company is a joke. You're a feature, not a product. Start acting more like the feature you are, please, and support basic functionality that we shouldn't have to beg you to support. 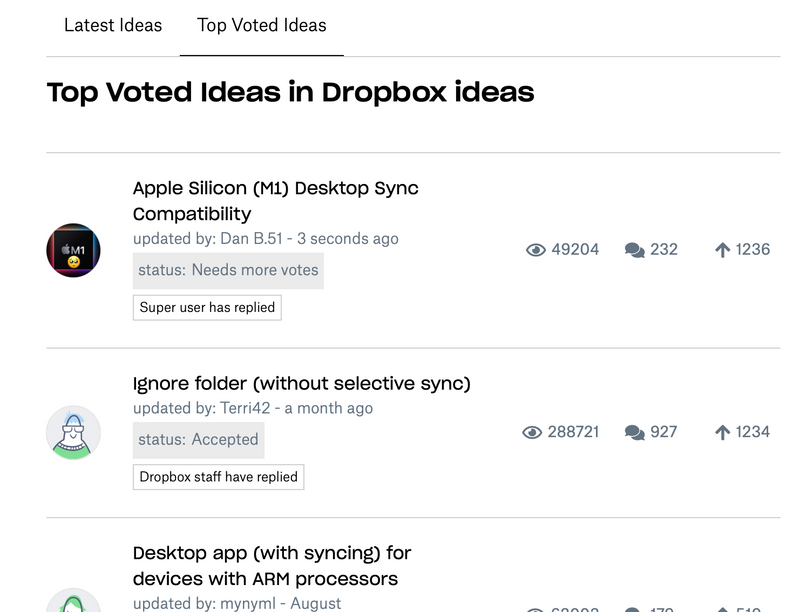 It's ridiculous that this isn't just an internal priority.  I have been a long time Dropbox customer (since almost the start of the app) and WILL SWITCH if they don't support it by the time the 30" IMAC delivers.

I guess I'll start migrating my stuff so that I never have to install Dropbox when I get my new MacBook next month. Thanks for the clarity on where the company is on this change!

It better support apple natively or I am gone as well.

I've been a paying Dropbox user for over a decade, and have really evangelized the product -- including getting my company to pay for a corporate account.

I'll absolutely be bailing from both if this isn't resolved quickly. I just ordered by first M1 Mac and I'm just STAGGERED at the attitude being shown here by Dropbox. You made your product by being seamlessly cross-platform, and now you're shunning the Mac when you've had a YEAR to get to an M1-native build. This is immensely disappointing, but the good news is that there are other options with native M1 builds -- in fact, near as I can tell, Dropbox is the only holdout of the major sync platforms.

Time was, Dropbox was alone in this space, but even OneDrive works well on Macs and iOS now.

I will remember the time I read the article that took me to this form thread. Currently have one Intel and two arm-based Mac;  When a sub request comes in this will definitely affect my decision moving forward with dropbox service.   I’ll have to monitor the battery usage of the Dropbox app

Been a dropbox user for over 10 years, and I find it very disturbing that there even has to be a poll for this. Why would I support you with my business if you don’t support your core users?

You better put a good PR person and some programmers on this and turn it right before it’s to late.

This needs to happen asap. We are basing our backup routine on Dropbox, currently 145tb of data in the cloud. Native M1 is a must have for the future, as we are now investing in new macs