I use my tablet for one thing - lyrics sheet using an Android app named Songbook. Songbook allows synchronization using Dropbox. So yes then Songbook and Dropbox.

I can install Songbook and I can configure it to synchronize my Songbook in Dropbox. But I also utilized Dropbox to synchronize a folder I call Media which has all of the MP3 files for the songs in Songbook. Songbook does not automatically synchronize the Media folder as I have consciously made that separate because some of the people that use my Songbook do not want all of those MP3 files. So I want to install Dropbox on my tablet to synchronize the MP3 files too. But when I try to install Dropbox from https://dropbox.com/downloading I get sent to Google Play and it says Your device isn't compatible with this version. Now this is on my brand new tablet that is:

Now I say new tablet because my old one was klunky and slow. It is:

Please advise. It would really suck if my newer tablet with Android 9 didn't work as the Songbook app has different functionality for different Android versions and the Android 9 version of Songbook has functionality I want. Plus the new tablet has better CPUs and a lot more storage. I am shocked that the newer tablet has an older kernel version and that appears to be blocking me from installing the Dropbox app.

Could you try navigating to the Play store and try downloading the Android Dropbox app directly from there?

The requirements for the Android Dropbox app is 6.0 or higher, so it's rather strange that you receive this error on your new device.

If you still get an error when trying to download the app directly from the app store, could you send me a screenshot of the error? Also, please make sure that there are no pending OS updates for your device.

There is no error. When I go to the Playstore and search for Dropbox it doesn't even show up. I thought that odd so I went to https://dropbox.com and clicked the link to download the app. That did go to the Playstore but as I said before, it said that the app was not available for my device.

Adding more info... The unit I bought clearly states that it's Android 9.0: 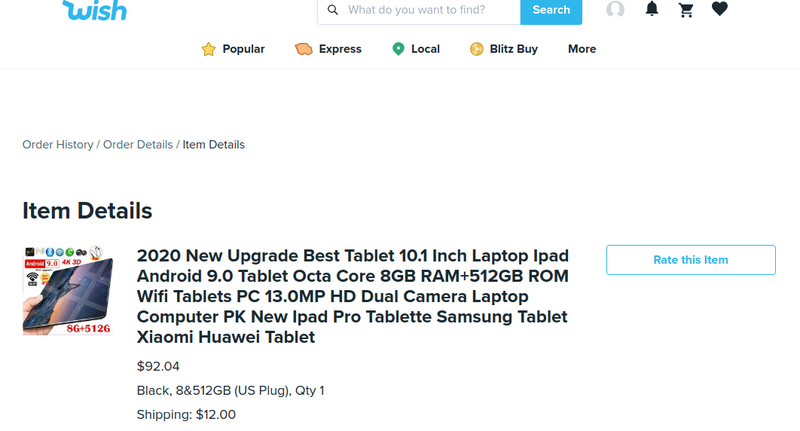 When I go to the Play Store and type in Dropbox, this is the list of apps that I get: 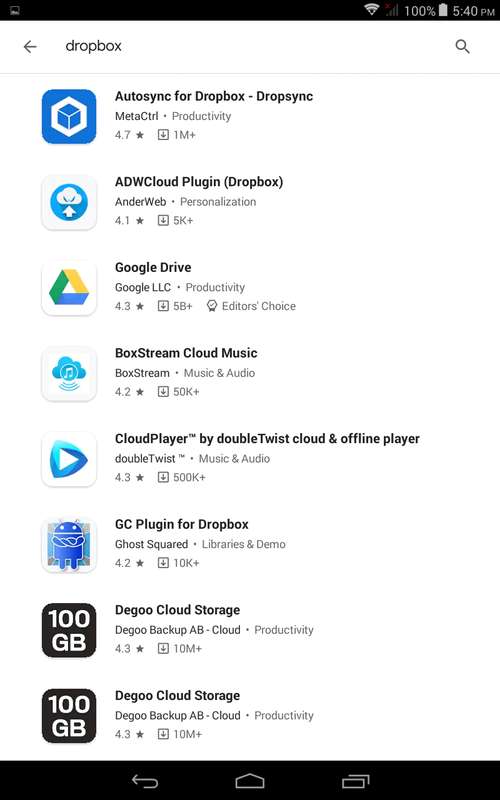 Note the absence of the Dropbox app. If I use a browser to go here: 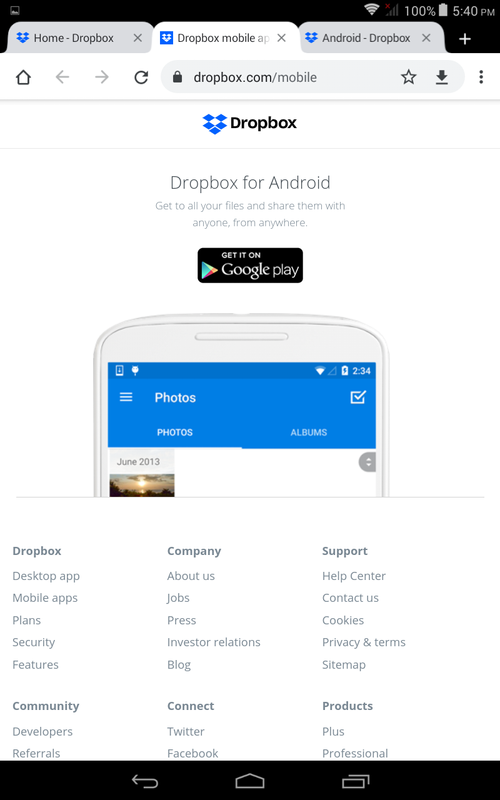 Then tap Get it on Google Play I get: 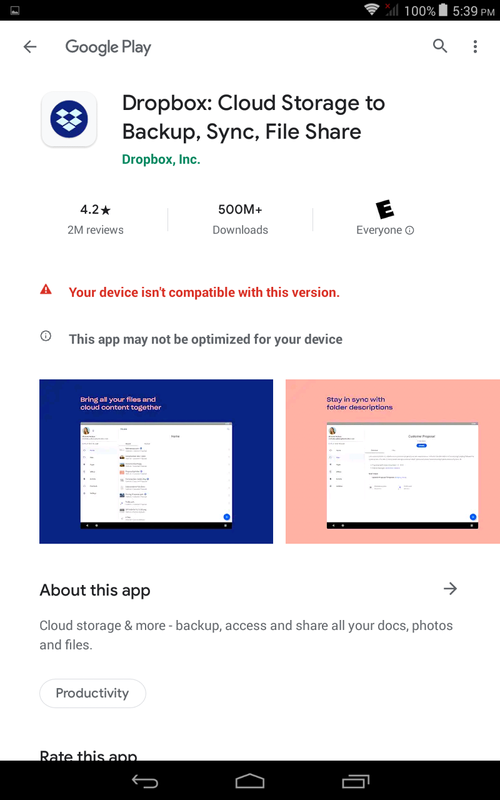 Interestingly other apps seem to also not be compatible: 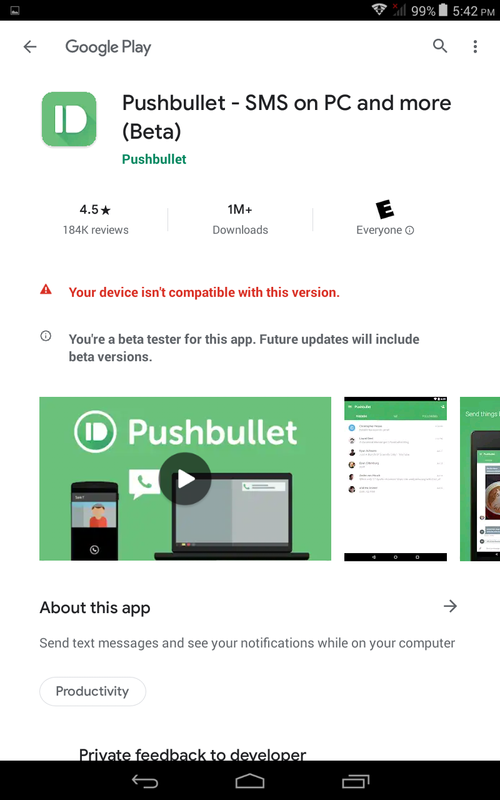 Here's a screen cap of About Tablet: 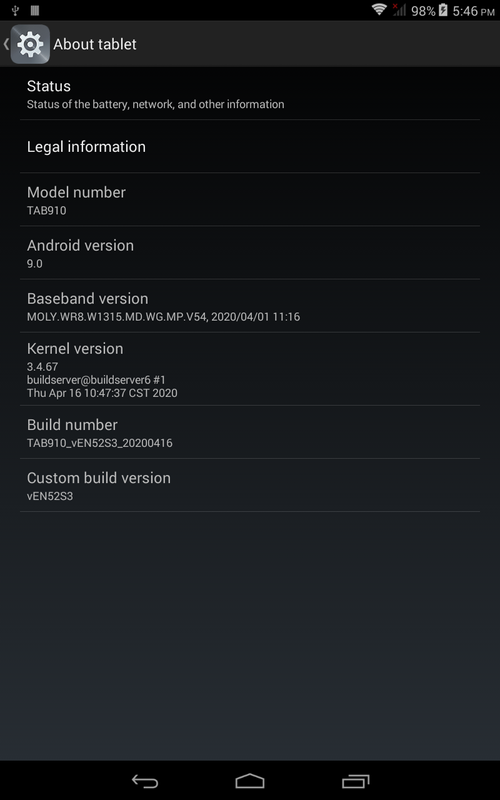 Note that I couldn't even find a button in Settings for checking for system updates.

Finally, their website, wish.com, has no way of contacting a human. The support bot offers limited selection which basically implements, if you're not happy you can return it.

Thanks for all the info @defaria!

After doing some digging, it seems that this issue most likely stems from the Kernel version of your tablet not meeting the minimum requirements for the Android version it's running.

According to this article Android 9 requires a minimum Kernel version 4.4.

I'm afraid that there isn't much I can suggest here as you mentioned not being able to update the device. I'd suggest either reaching out to the point of sale (Wish) or the developer of the device to look into this further.

I'm not sure where to point you towards here as the item is listed as Samsung, Xiaomi and Huawei which are all different developers so perhaps there were multiple devices in the same listing.

While I'd love to be able to help further with this, the Kernel version may cause other underlying issues with the device so I'd highly recommend looking into this further since the issue is not just isolated to the Dropbox app as you mentioned.

Please don't hesitate to get back to me here though if you have any questions, I'll assist as much as possible from my side.

Pretty much as I had feared, that the kernel was too old. How did they build an Android 9.0 with a kernel less than 4.4 if it's the required minimum? Also, how can they sell a device that provides no way of updating itself?!?

Probably good questions for Wish, Samsung, Xiaomi, and Huawei. I think Wish is just a distributor and knows nothing really about how the software was made and the other 3 will just point their fingers at the next guy. Where you might be able to help would be if you could provide me contact info for Samsung, Xiaomi, and Huawei. How did you determine that those were the developers?

Chatted with Samsung support. They said it's not their tablet. I managed to get wish.com's chat to allow me to submit my question and supposedly their support people will get back to me. I fear it's just the way they do business and my only recourse will be to return the tablet. Ugh.

Generally, I only use these tablets for the purposes of running the Songbook app to display lyrics. The Songbook app has a way to sync with Dropbox and I've configured that and that works, so I guess I could keep the tablet. However, I also have .mp3 files for each song and because people I share my Dropbox/Songbook folder with don't always want a huge download of all of these .mp3 files I have put it in a separate Dropbox folder. This is the reason why I want Dropbox installed on the tablet so I can sync that folder too.

Ugh, again, I'm just pissed that they put out a tablet with Android 9.0 and an old, not supported kernel and then give you no way to update the OS. I mean what if security updates are required?

I'm actually not sure which is the actual developer for the tablet @defaria, I mentioned Samsung, Xiaomi and Huawei since they were in the title of the listing for the tablet that you sent in your first screenshot.

I can suggest doing a web search to find out how to contact the other developers, however at this point your best bet would probably be through the point of sale.

I'm not 100% certain if Wish is a certified reseller for these companies so they most probably will direct you back to Wish on this issue.

I hope that this can at least point you in the right direction here. I'm just a post away if you have any other questions!

The chinese tablet you have actually has android 4.4 kit-kat instead of android 9.  It spoofes the "settings-about phone" into showing android 9. The screen size is also spoofed as it is 1200x800 instead of the reported 2560x1600. It also has much less storage ram than the 512gb listed, actual storage is 16gb.  The google store apps can tell that the android version wrong and that is why you get the "Your device isn't compatible with this version " message. I got ripped off by this scam tablet as well and I can't install many of the newer synth apps I use.