There seems to be no option to expand boxes or files to see the entire name/ location of a file with a long name. I’ve encountered this a few times on dropbox now in a few ways and it is frustrating.

The most recent being at work where I had to upload thousands of files from a freelance designers' iMac, who had very poor workflow resulting in hundreds of files with almost identical - and long - names. Sigh. At the completion of the uploads, scrolling through the upload log box to check all the errors was where I got stuck.

So, as you can imagine, a lot of time has been spent trying to track down and figure out where/ what file is missing. Tedious to say the least. I am on a late 2013 27" iMac, using Chrome as my browser (Safari doesn't support folder uploads) and also have the dropbox app on my desktop which I use as much as is possible.

Guessing this is more like feedback to be considered in the next update, rather then a problem to fix... but if anyone does happen to know if there's a way around this or if I'm missing something, I would greatly appreciate some help?

Thank you for your extensive explanation on this, we really appreciate it.

A screenshot of the issue you are experiencing would help, you can upload one by going to the "Photos" button while editing your post here and then "Upload" to upload a screenshot of this (removing personal information).

Once again your feedback is very much appreciated and I'm passing it on to our Developers.

Thanks for your reply

Uploading the screenshot worked this time - the only way it worked was to upload it as my profile picture first: 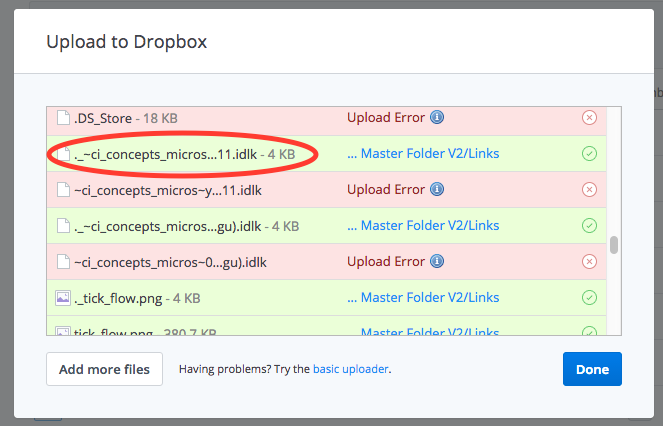 Thanks for the clarification and for providing a screenshot.

We are always looking for user input regarding the features on our website. I will make sure your comments are passed along to our development team.

Thank you for your feedback, we really appreaciate it.

Yeah. It's absolute crap. It's 2017 and you'd think they'd figure this out by now, the fact that Dropbox is a file service and having the ability to see more than 8 characters of a file name on the web and mobile devices would be something they cared about. Doesn't matter if you pay $150/month for the business account either.

Hah! And here I was thinking I definitely must be going mad... surely I'm wrong somehow.

After uploading thousands of files with around 680 errors,

I had to go through folder by folder, comparing each file to the original to check if any were missing...

And on that day, I poked my left eye out with a fork to take the pain away.

This is a ridiculous flaw in  using DropBox. I hope they fix this soon some apps have the full name of the file visible when you mouse over it.

Thanks for getting in touch with this feedback.

It 'll be a pleasure to pass this on to the developers' team, so as to take that into consideration for future improvements. Much appreciated, and please let me know if there's anything else I can help you with in your reply!

Steven B.31
Helpful | Level 5
This would be encouraging if it wasn't the same answer we've heard for 3 years.
3 Likes
Reply