Cannot save Excel to Dropbox

Cannot save Excel to Dropbox

When using EXCEL with my EXCEL Login i want to save a sheet in Dropbox and I don t get DROPBOX to do that but i get OneDrive Personal. I try to add Dropbox and click on "Add a Place", then i get OneDrive, OneDrive for Business and SharePoint.

When i sign out of EXCEL then i can t save the document at all.

I have EXCEL version 16.36 and i bought the liscence.

Does anyone knows how i can save my docs in Dropbox ?

Hi there @JoseJOSE, I'm sorry to hear you're having issues with this!

Just so I can have a better understanding, can you let me know where you're editing and saving your files from? For example, on your computer or via a mobile device?

Also, please let me know the OS and version of your device and the Dropbox app that you have installed.

It used to work until there where multiple updates and reworks at the same time, wich makes it more hard to understand and resolve the problem. I m sorry if this sounds confusing but it was at that time the situation, I will do my best to explain

i had an Update of my Apple Macbook Air to Catalina Version 10.15.3, before i used the earlier Version as i m doing the regular recomandated updates and i updated the EXCEL Software to the next recommanded 64 Bit version and since then i had my own login with email adress for EXCEL, i don t remember how i loged in before but i think there was no login required....... And at the same time as i remember before and after the update i used to try to a get some docs just on my iphone without using dropbox because dropbox would only load my docs when i had WLAN from at home (but i found out there is a set up but that does not play a roll now), so then i played on the phone and get it set up the docs in One drive. Since then i can work with previous documents on dropbox (the ones i saved when it was all normal) but now new docs i can t save them in dropbox, also missing completely the setting to have a chance to choice dropbox for saving location...to me it looks like one drive is set up for his own thing because when i log out of EXCEL then it is not possible to save the docs.

So i found a way to do it, my way as Frank Sinatra used to sing, a fantastic artist !

Save doc on One drive ( have no other choice)

Delete doc it on One drive

Go to download files on computer and drag and drop on my dropbox files, voila ! I have it in Dropbox

Before i could just save straight to dropbox.

Hope i wrote it human wise to follow up

I m editing and saving files on my Macbook Air only, just one Iphone for reading

Thanks for all the details @JoseJOSE!

You should be able to save a file in any location on your computer, so please try this out and let me know how it goes!

No i can t. I tried to click it but it does not come up anymore.

Maybe i should contact Open Drive and or Excel...I don t think this is an Dropboy issue....

As a last step we can take here, would you mind sending me a screenshot of the options that you see when trying to save your document @JoseJOSE?

If you're not seeing the appropriate options to save your files then it might be something that Microsoft Support might be better equipped to assist with.

Having said that, if you'd like to send over a screenshot I'd be happy look further into this as much as we can. 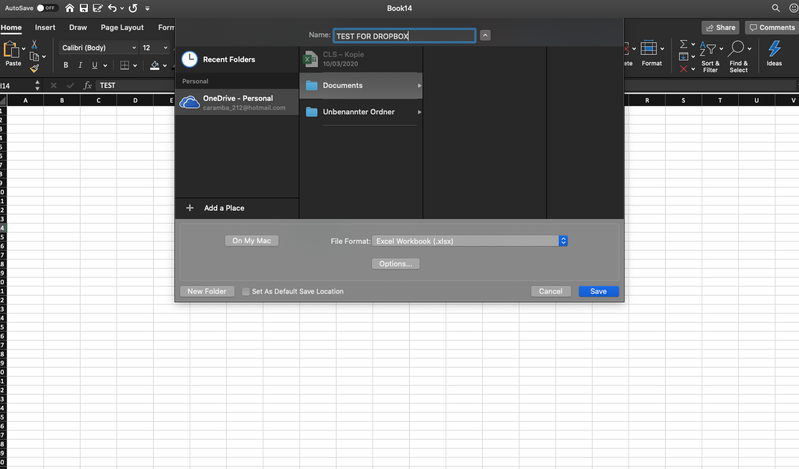 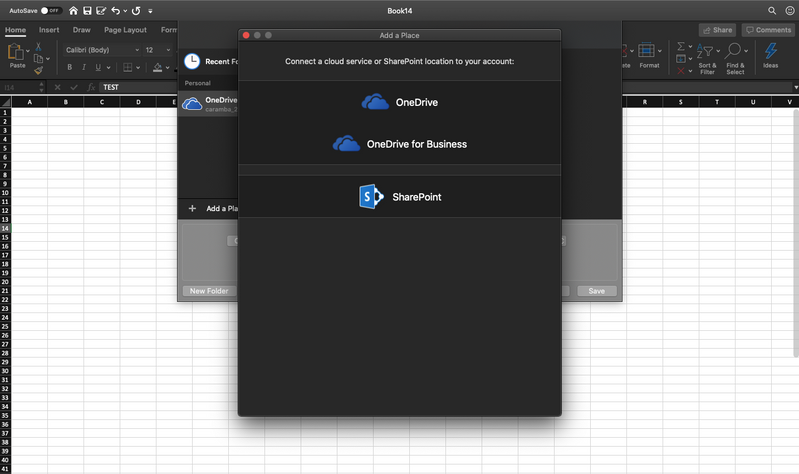 Hey hm i made two pictures, hmm please let me introduce you into those pics

Pic 1 is when saved the first time.

Hope this is clear, if not please let me know and i go throug with u.

Could you try clicking on the "On my Mac" option in the lighter grey section of the window as shown in your first screenshot @JoseJOSE?

This should allow you to pick a location on your computer, which would also include the local Dropbox options. Let me know if that does the trick!

I tried that before many times, to me it sounds logical it would work....This is what happens: I do all the regular steps then i come to click "On my Mac" and that window disepaers and absolutely nothing happend..........

Let me know what u think !

I'm sorry to hear that didn't work out @JoseJOSE.

At this point I'd suggest reaching out to Microsoft Support for further assistance with this since you're having trouble with saving to local options.

Sorry that I couldn't be of much more help with this but please don't hesitate to get back to me here anytime with any questions or updates.

I hope you have a great weekend and stay safe!