Hello. Every time I boot up (or quit and then relaunch DropBox) on Big Sur, I am prompted twice that "DropBox needs to change permissions for the Folder:.../DropBox." 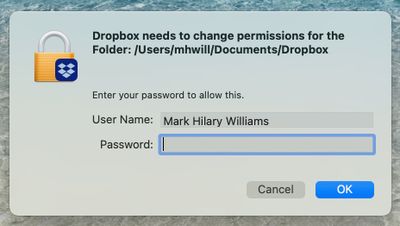 Other than the prompting, DropBox works absolutely fine. I have 3 Macs; on 2 of them DropBox is fine and does not prompt me upon launch. I use my DropBox account on 2 of the 3 computers, my wife has a separate DropBox account on her computer. The settings for DropBox on my 2 computers are exactly the same. Don't recall the name of my subscription level of DropBox, but it is not Basic; I have 2 TB of DropBox storage. 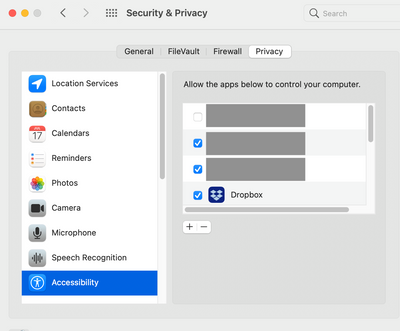 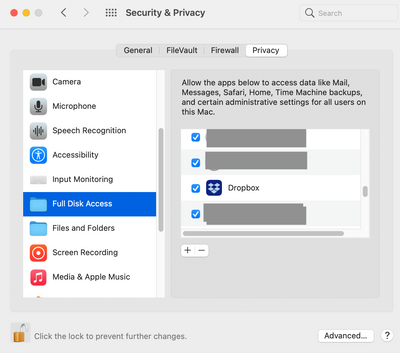 Admittedly, this is not a big problem, as I do not reboot frequently (maybe once every 2 weeks). But it is an annoyance.

From what I can see, the location of your Dropbox folder is inside the Documents folder, which isn't the default location.

This could be what is causing the prompts to appear. Did you manually move it to that folder?

Are the other computers storing the Dropbox folder in the Documents folder, or in the Home folder?

My DropBox folder has always been within my Documents folder on both my computers - for several years. It has always synced between the two (and the cloud) just fine up through macOS 10.15 (Catalina). But once I upgraded to MacOS 11.x Big Sur, I started having the Permissions prompt (at reboot/launch of DropBox) on only one of the computers. The syncing itself works just fine - as always.

My wife's computer, with her own Basic account, is set up the same way - DropBox within her Documents folder. No permissions prompt, syncs  to the cloud just fine.

I can certainly change the location of my DropBox to the root level of my user account if you thing it work trying.

Jay
Dropboxer
Do you use iCloud, or any other software that might be trying to backup or change the Documents folder itself, and in turn Dropbox, which might be affecting the permissions?

You could try to move the Dropbox folder back to the home folder to see if this would work, provided it doesn't affect an apps or services which are still pointing to the Documents/Dropbox location.

Jay, I do not use iCloud (or any other service) to backup or sync my ~/Documents folder.

I moved my ~/Documents/DropBox folder to ~/DropBox (on the affected computer, not on my other one where I do not have this Permissions problem), unlinked that folder, then relinked to it. I created a few new files on both computers that I stored in their respective DropBox folders, and DropBox successfully synced those files.

I shutdown my computer, rebooted it, and upon DropBox start-up, I was again prompted - twice - to allow Permissions.

I quit the DropBox app and relaunched it, I rebooted my computer, and I shut down then booted my computer - between each of these events I created/moved files on both computers. Syncing worked perfectly in all cases after DropBox launch, but in all instances I was prompted to allow Permissions.

As a followup, now that my DropBox folder is in the default location ( ~/DropBox), I rebooted, uninstalled DropBox, rebooted again, made sure DropBox was not present in Privacy settings, rebooted again, downloaded a fresh copy of the installer and re-installed DropBox. Upon initial install, I was again prompted, twice, for Permissions access. (In my last post, I moved the folder location, quit and/or rebooted, but did not uninstall DropBox).

Jay
Dropboxer
I'd recommend getting in contact with the support team directly to see if they can look into this matter in more detail on their end.

Jay, Thanks so much for your help. I am very impressed by your responsiveness and dedication to helping me.

Per your request, here is the ticket number: Ticket #12149746: DB: Frequent prompting for access to Permissions

Jay
Dropboxer
Thanks for the reply, I can see that a support agent is assisting you with this matter.

They'll be able to investigate from there on!

Yes, they have already sent me an email and I have responded.

Thanks again for all your help.