Well the dropbox app sucks big time now on my M1 and uninstalled it. It consumed +4GB of RAM and it failed to properly sync 2 files to my Mac which is under 10GB that I had to wait for more than 24 hours to complete through a 50 Mbps connection. The ETA kept changing from a few minutes up to "n" number of days LOL.

Can't wait to migrate out of Dropbox very soon and never look back. 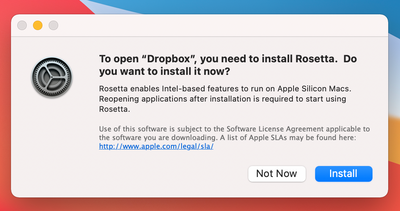 Apple barricaded kernel extensions on M1 chips. For an app that uses kernel extensions to work natively with M1, you have to boot into recovery mode and change a security setting. Dropbox obviously doesn't want to play ball because it's not a long-term solution.  A new API to access files and folders remotely was recently introduced and dropbox might be using that instead: https://developer.apple.com/documentation/fileprovider

Apple barricaded kernel extensions on M1 chips. For an app that uses kernel extensions to work natively with M1, you have to boot into recovery mode and change a security setting. Dropbox obviously doesn't want to play ball because it's not a long-term solution.  A new API to access files and folders remotely was recently introduced and dropbox might be using that instead: https://developer.apple.com/documentation/fileprovider

When using the File Provider framework there could be limits on functionality for third-party sync services like Dropbox. The added benefits for services like Dropbox and OneDrive will be limited to what Apple allows, which could be why it is taking so long for these companies to release a native Apple Silicon version.

M1 was my final decision to say goodybye to Dropbox after many years of being a super fan of the service. Its not even the non native M1 factor, already for years Dropbox was becoming clunkier and heavier update after update, taking up inordinate amounts of system resources... when I made the jump to M1, decided to not even dare install it. I must say I do miss it, iCloud just... isn't as good, but I'd rather have that than a hungry process, ram and power hog.

They might want to see Backblaze' most recent update, with huge efficiencies...

To the people leaving Dropbox because they upgraded to M1: What did you expect? Apple constantly changes.  Answer: Don't upgrade unless you research the implications of upgrading. If you are impetuous about computers doing what you want you will be endlessly frustrated. I also upgraded to M1. Nothing is seamless. There is no perfect solution and if there was one, it would not be perfect in 6 months.

Ice Cream is the only thing essential for the NOW.

So glad we're making the switch this month to Google Drive that syncs files faster and is incredibly lighter to run. Breaking free of Dropbox and their possible future security breach LOL

Amazing that one of the most complex apps on the Apple platform is now native also, and still Dropbox says "coming soon, not sure when, but soon"

PS; already started the migration to Google Drive, once my Dropbox sub is expired in Nov, I'm gone.

Thanks for telling us @nps-ca  You punish them.

Please go here and add your vote - you will see other ideas have much more support:

nps-ca
Helpful | Level 6
A vote on that post won't change one thing. But this thread sure does bring out the apologists. This is my last post in this thread
1 Like
Reply