I've been having the popular "constant high CPU usage, even when finished syncing" on Windows 10.  I checked the list of seven possible causes and none of them apply (except maybe "lots of files" with around 300k files).  There aren't any symlinks.

To see what Dropbox might have been up to, I ran Microsoft's "Process Monitor" utility.  It appears the process is checking the same four registry entries in a loop, hundreds of times a second.  (This admittedly makes many normal operations take much longer--like right-clicking the desktop and waiting 5+ seconds for the context menu--because Dropbox is essentially performing a denial of service attack on the kernel by flooding it with Win32 registry calls.)

The registry values are: 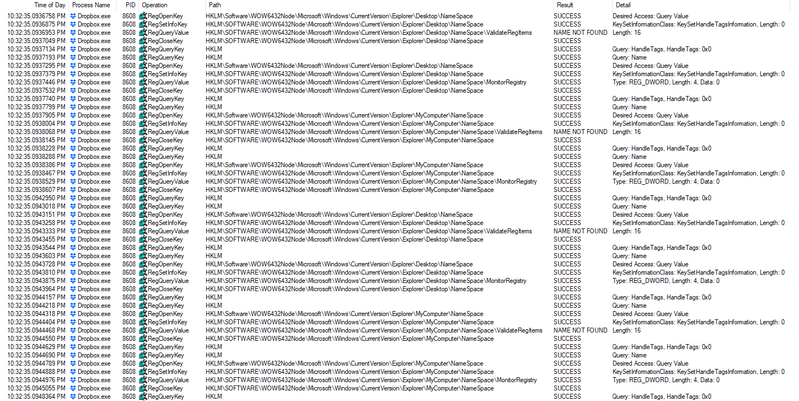 I couldn't find any documentation on what those registry entries are, should have for values, or anything else about them anywhere on the Internet.

The Dropbox process' memory usage also appears to slowly grow without bound until after ~40 minutes, it crashes once it hits 4GB or so.

This is a new install on a new machine.  I copied my old Dropbox folder from the previous computer (over the network, manually) then installed the Dropbox client and pointed it at the copied folder.  It was working fine until after the first reboot.  I eventually found the community post about resetting permissions.  That didn't change any behavior.  From very nearly after the app is started right up until it crashes, those four registry entries are constantly assaulted.

If anyone has any suggestions, I'd love to hear them!

Hey @Falonn, I greatly appreciate the detailed description of the issue and the screenshot.

We have a new Dropbox install on a new device,  a loop of Dropbox entries in your activity monitor, high CPU usage an the app crashing eventually.

How did you point the Dropbox desktop app to the copied folder?

When you say you backed up your old Dropbox folder from the network manually. Can you you let me know more about this? A step by step walkthrough would be super helpful. Please, name any third party services, apps involved.

Finally, please provide me with the Community post that helped you change permissions.

Once I have all the info on the matter I will help you solve this.

I found most of the advice (including the permissions reset under #3), on this page.

The copy was done using xcopy (specifically, from the new computer, over a network share "xcopy /b /c /e /h /i /k /s /x /y /z Dropbox D:\Dropbox") and again for the AppData\Local\Dropbox folder.  I was hoping everything would just carry over automatically.  At first, it appeared to work just fine.  During the first launch wizard, it even had my selective sync folders correct already.  I believe my "installation" method is unrelated, but I do see your point that there are a lot of non-standard moving parts in my problem description.

So, over the weekend, I tried to simplify my case to rule as much out as possible:

I'm still a few hours out from that initial sync completing, but the registry craziness started again almost as soon as the app was launched.

Looking more closely, (now that the sync is down to just the bigger files and things are moving a little more slowly), that pattern of four registry checks seems to be happening four to six times per synced file.  If you include the surrounding hkey open/close calls, that means Dropbox is making 144 registry calls to the Windows kernel per synched file, which seems a little... abusive.

Filtering out all but one of the calls, you can see each block of events grouped by timestamp:

I might suggest you cache those four values instead of attacking the computer.

We'll see after the sync is complete whether it continues.  With about 1,600 (of the largest) files to go out of 140k, the Dropbox process is sitting at "only" 1.8GB of RAM, so we may be able to chalk the crashing up to the large file count.  That simplifies the story even more.

I am sorry to hear that the advanced reinstall you performed did not help.

I am happy to read this post though, because I have all the information I need to work on this with our team.

I am creating a ticket for you now, please respond there whenever you get the time.

Thank you so much for your efforts and patience!

Is this issue fixed?    I have the exact same symptoms, although I still haven't bothered firing up ProcMon.

The dropbox CPU usage is totally unacceptable, especially being given that Dropbox in 2015 was lean and fast. Sorry if my words seem a bit rude, but users have been complaining about this high CPU usage and issues with Explorer.exe for years.

Thanks in advance for any info on that topic.