Hi, I have been having problems syncing my Dropbox since yesterday. The current build I am using is 132.4.3800.

The problem first started yesterday when I noticed that certain files I made changes to were not syncing (permanent blue syncing symbol on the Dropbox icon). I restarted Dropbox and my computer multiple times to no avail. I then tried to uninstall and reinstall Dropbox but faced multiple errors, including being stuck on the uninstall screen and subsequently failing to uninstall, and reinstalling also failed. In the end I was able to open Dropbox but I'm not sure if there are any internal errors or corrupted internal files.

After reinstallation, my Dropbox was stuck at syncing (6000+ files), with zero movement in the downloading number even after I left it for a few hours. This morning, I toggled a few of the folders for selective sync and I narrowed it down to two particular folders/subfolders that do not sync when I select them under selective sync. My Dropbox appears to be up to date when these 2 folders are not selected to sync. I have checked the filenames of the files in these 2 folders on Dropbox web , they do not appear to have the special characters and all these files were perfectly synced before yesterday. The problem started with a file called 'bills.xlxs' which clearly does not fall under the naming convention issues. I have also tried to fix permissions and hardlinks under the Accounts tab in Preferences, but this does not help in the selective sync of these 2 folders (does not move from 'Syncing 1921 files..').

Could you advise on how to solve the issue, and if it's occurring due to an automatic Dropbox version update? Before yesterday, there were no problems with my Dropbox syncing.

Lori
Dropboxer
Hey @msmf88, let's see what we can find on this together!

Could you let me know the current syncing status of your Dropbox desktop application?

As for the 2 folders you mentioned, have they managed to sync to Dropbox successfully?

Let me know, and we'll take it from there!

Thank you for your reply. My Dropbox appears to be unable to sync new files. This is the status when I unlinked the 2 folders:

However, when I link the 2 folders, this is the status:

The number does not decrease even after a few hours. However, I just noticed that new files are also unable to sync to a different folder. My Dropbox automatically saves screenshots taken to a 'Screenshots' folder, which is not either of the 2 folders referred to previously. My most recently taken screenshot is also unable to sync, it simply says waiting to sync: 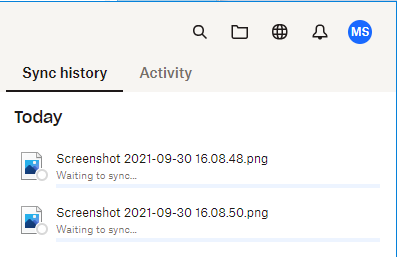 Lori
Dropboxer
Thank you so much for the screenshot, @msmf88!

Have you made sure your Dropbox account has enough space, in order for the content to sync?

You can check this right here.

Yes I have cleared space in my Dropbox. My other devices (phones) have no problem syncing after making changes to files, and I am also able to manage my files on the Dropbox website. It is the Desktop app I am having trouble with.

Sorry to interrupt here.   Sometimes we deal with files that 'locks' the files when in use and in some cases, a server doesn't let go of a file and this has been a pain for the Tech guy to figure out in our work plant.  Is it possible that these files are locked by an application?  Does the behavior goes away after shutting down the application?  or and does it go away after reboot?

and are these by chance a file in a shared folder that is shared by another user?

I am trying to help diagnose this issue.

if this works and it was a solution, please click on Accept as Solution.  Also clicking on Likes would be super.  Thanks!

Thank you for your reply, I am not sure how to detect when a file is being 'locked' by an application. However I have restarted my computer multiple times to no avail. In addition, it's not a particular file as I have tried adding a new (small) file to the main Dropbox folder on my computer, but it fails to sync (the status is stuck as 'Waiting to sync...') Hence I suspect that the problem might be with the Dropbox app on my computer itself ?

My dropbox folder is not shared with anyone else, except that I am using multiple devices to access the same dropbox account (2 phones, 1 computer). Would that cause a problem with the syncing?

Lori
Dropboxer
Thank you for reaching back to me, I hope you enjoyed your weekend, @msmf88!

Can you send me a screenshot of your account's available space as shown here?

Hi, here is the screenshot:

I am able to edit and save my files when opening them on the web e.g. excel web or on my phone, and I am also able to add files to my dropbox folders directly on the dropbox website or on my phone app. I am only having problems when using the desktop app on my computer, hence I do not think it is an account issue but a desktop app issue.