Since the latest version was installed on my iPad and iPhone I cannot export a PDF file to dropbox with the copy to dropbox option because that option no longer exists. There is only a "Dropbox" option which wants me to send it as an email, like the "save to dropbox" option which no longer exists under that name. It seems unlikely to be on my end since both devices simultaneously got this problem with the new version.   I rebooted the phone anyway and it made no difference. Safari, chrome & Goodreader the same behavior.

help  please, I use copy to dropbox all the time and the other is much more time consuming, inconvenient and forces me to email myself cluttering up my inbox.

Hi @Streyy; welcome to our Community!

As your query seems to echo this discussion, I believe there is an option to 'Save to Dropbox' further down on the options you get when you tap on the file you'd like to export to our mobile app.

If that's not what you're referring to, please post a screenshot so I can have a further look into this.

I made screenshots on my old iPad mini which has not been updated yet and shows the old behavior,  but I must be up too late because I can't find how to add an image to a post on this forum (on an ipad).  Please clue me in...

basically the list of export options when doing something like displaying a PDF file includes a 'copy to dropbox' option.   When I select that it takes me instantly to the Dropbox app and all I have to do is choose the folder.  In  the new behavior that option no longer exists, nor does the save to dropbox option it's just labeled 'dropbox' and it acts like the old save to dropbox which required me to send an email.

p.s. not surprisingly, this  is not limited to PDF files  I just had it happen trying to upload images to my dropbox too.

The  other difference is that Save to Dropbox can't apparently be added to the list of icon images that shows up but only under the favorites list below the main options. Not as convenient but it's a workaround. If you still would like a screenshot of that I can provide one.  Thanks for your quick response!

Just back to report that the behavior I described has been replaced by a reversion to the old behavior and option icons.

And I wish I hadn't reported that because now it's not working again.  I see there was an update two days ago.

Current behavior, from viewing a PDF in Safari and selecting export: when I select "Dropbox", it starts to do so at least as far as showing me my dropbox folders, then immediately a popup says "couldn't save content please check your Internet connection and refresh the page".  My Internet connection is just fine. This is repeatable and didn't change after I restarted the iPad.   Send to dropbox with the email mechanism works but I have no intention of going through that process with the five other files I need to send over there tonight. Not a happy camper.

Thanks for the updates here @Streyy, I'm sorry to hear you're having trouble with this still!

Can you let me know if you're getting the same error message when you're using a different WiFi connection or cellular data?

Also, do you get the same error if you try and choose a different location to export too? Eg. another app or locally on your phone in the Files app.

Please send me a screenshot of the error message too. If you have any issues attaching it within your reply here using the "Photo" option, you can use a shared link instead.

Thank you for your quick response!
For your questions;

yes I get the same error using a different Wi-Fi connection.

no I don't get the error exporting to something else, such as goodreader or files. 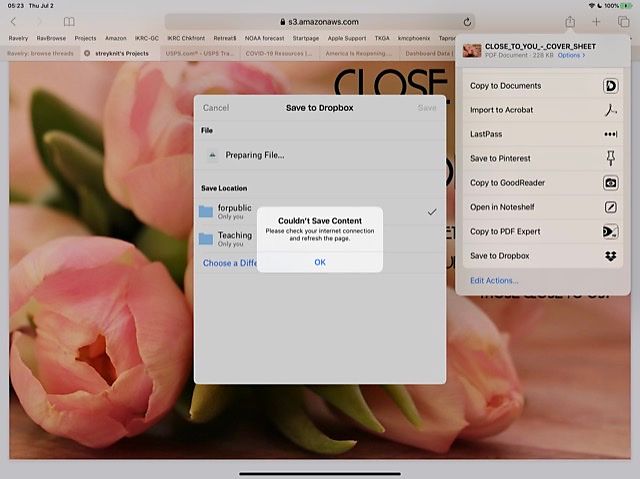 Thanks for that screenshot @Streyy!

You mentioned also using Chrome in your first post, can you confirm for me if you get the same error message when using the Chrome browser?

If so, can you please try using a private/incognito browsing window too and see if the issue persists there?

I wasn't able to replicate the error on my side weirdly enough, so this info will be very helpful in allowing us to narrow down the root cause here.

I must confess patience is running out and I'm now getting extremely irritated. Every other time that dropbox updates this problem recurs.   It's now back to the state where I cannot export a file from an iOS device to dropbox without sending email.  Copy to dropbox is not an option, save to dropbox crashes after giving the same error I reported before,  &  "dropbox" wants me to send it as email.

The problem  is only returning after a Dropbox update; it doesn't matter whether I restart my devices or anything else and it happens on both devices, phone and iPad.  Please get  to the bottom of this!

I should add that with the various dropbox updates , the export options to dropbox change: sometimes copy to dropbox exists, other times it doesn't, sometimes Save  to Dropbox asks for email , sometimes it doesn't.   I can't even remember how the simple "dropbox" option varies.  I don't  see how this variation could be due to anything other than an interaction between dropbox and iOS/ipadOS.

ETA 2 Tried with Chrome and this time with that browser, save to Dropbox does not ask for email, it does what used to be done with copy to dropbox which doesn't exist.   That gives me a workaround until the next change in behavior,  though I will not be using chrome much on the iPad and still  badly want this fixed. On the iPad save to dropbox gives me the couldn't save content popup mentioned before, even after restarting the iPad.

Note that before this last  dropbox update,  the copy to dropbox option existed as it has done for years (except periodically during the last month when this problem started) & worked as expected.   The changing behavior of the various options and the apparent renaming of those options is confusing &irritating in itself, though nothing to being unable to copy directly at all.