Does anyone have any advice on how to use the google suite with Dropbox on an Ipad?

As the pictures below show, the Dropbox ipad app can't open up google sheets files, even though the google sheets app is installed. If I try to drag the google sheet file to the new window, it tries to save the file into my Google Drive account before opening. (The process fails and I can't open it, though I wouldn't want to save/uploead to dropbox every time I am finished with the spreadsheet).

So I tried to open the google sheet file via my Safari web browser. For some reason, Drobox cues the drop down bar to say "open in Dropbox" (see pic) - clicking this only leads to the same result as described above. My only option is to try and use google sheets on the safari webbrowser, by opening the file on dropbox.com. Sadly, the functionality isn't very good on Safari, the bottom menu on the google sheet doc often gets lost, making navigation around the spreadsheet impossible.

Same old story, Dropbox seems to be making everyting available via a web browser, but not making the same accessibility available for non desktop/laptop webrowser users.

Can anyone give me any advice, or suggestions? An alternative is to resort to Microsoft Excel, but I really don't fancy paying for an office 365 subscription. Apple's numbers doesn't link with dropbox. 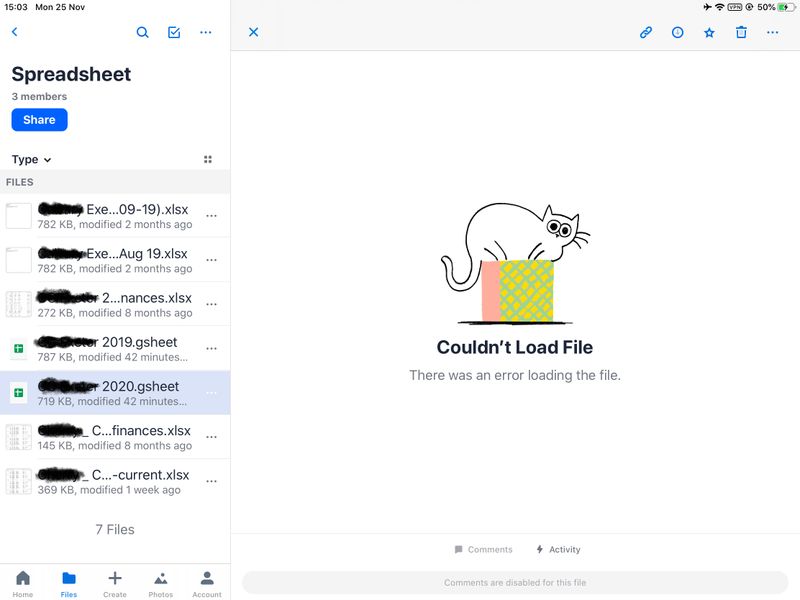 At the moment, the mobile app can only be used to view your Google Sheets. To be able to edit them, you would indeed need to open the file via your browser.

Since I understand that this isn't viable for you and you prefer using the local apps on your iPad, can you try opening the Google Sheet from within the Files app into the local Google Sheets app?

Let me how it goes - thanks!

Since I understand that this isn't viable for you and you prefer using the local apps on your iPad, can you try opening the Google Sheet from within the Files app into the local Google Sheets app?

Opening from the files app has the same problem: it wants to save the file to Google Drive before opening. So I can open google sheets, but would have to re-save to Dropbox after I have finished with a file.

Thanks for getting back to me @Olbliss!

In that case, I'm afraid there isn't much I can suggest there since you would still need to save the file back to Dropbox.

I've made a note of your feedback here as I understand that opening the files directly within the the Google apps would be very useful for you.

Sorry that I can't be of much more help with this.

Let me know if you have any other questions - thanks!

Hello daphne, I'm passing through this same situation. Therefore, It's not comfortable to use the iPad to edit the files and I didn't come out with a viable option as well. In the end, I'm using the computer to edit them via google sheets and save them automatically.

I really hope that the Dropbox app futurely fixes that.

Hi Daphne! are there any news on this topic? I have the same issue, don't own a computer, and can't edit the xls files on Dropbox! I am thinking about placing my files on Drive...

Please help us out here!

The previous thread was regarding opening Google Sheets docs, are you getting an error when opening the xls files in Google Sheets? If so, what error, and could you provide screenshots of what you're seeing? Thanks!

thanks for your reply!

I try to open an xlsx file on an ipadpro from dropbox.com choosing the option open with Google Sheets for the web. It seems to open it and I see it correctly and after a while it tells me that it can't upload it and the I get the login screen of Google.

I'm now using Excel for the web and that is giving me good results (on opening and editing the file). I would have preferred to use Google Sheets as this was the software I'm used to, but am happy now with this workaround (for the moment).

No worries, @Inesita, I'm glad to hear it's working better with Excel for the web. Let me know if you require any further assistance in future.

finally I would like to revert to Google Sheets as there we can simoultaneously work on a document. Is there a workaround in the meantime to open xlsx files from Dropbox with Google Sheets on an iPad Pro without saving them first on Drive?

Thanks for your help!