Re: Dropbox unlinked my linked devices!

RaisedOnBruce
Explorer | Level 3
Sorry, to be clear, I'm aware that I can upgrade of course. I'm talking about staying at the basic level on the basis that I regard this as an error by Dropbox?
0 Likes
Share
Reply

I use Dropbox on 3 devices...my iPhone, my iPad and my iMac.

On the iMac, I have used Dropbox on the Mac side and under Bootcamp/Windows for years, without any issue.

Today I needed to reset my Windows install on my iMac and now when I go to install Dropbox anew on Windows, it is considering Windows on my iMac to be a 4th device and won't let me use it unless I pay for an upgrade plan...despite the fact I haven't had to do this before...and it (the iMac) is still the same 3rd device,,,not 4th.


On the iMac, I have used Dropbox on the Mac side and under Bootcamp/Windows for years, without any issue.

Today I needed to reset my Windows install on my iMac and now when I go to install Dropbox anew on Windows, it is considering Windows on my iMac to be a 4th device ...

Don't look at it as devices, even though that's how it's explained. It's more accurate to consider it installations rather tthan devices. To Dropbox, your Windows install IS a different device and it will count as such when you're installing Dropbox. It's worked for years because you probably installed it prior to the 3-device limit going into effect, and any devices (installs) over 3 at that time were grandfathered in to the previous limit.

Now that you've reinstalled Dropbox, it's seen as a new device. You won't be able to link it without first removing one of your other devices, or upgrading your account. If you're unable to remove other devices, you can upgrade your account (even if it's just for a month) to be able to add your Windows installation as a 4th device.

OK, I get what you are saying, but you're suggesting this is a new device...it's not. I'm not trying to add this Windows environment to my account for the first time...it's there already.

Take a look at this screenshot. This is from logging into Dropbox on a web browser. You can see that I already have my Windows environment registered as a fourth device. 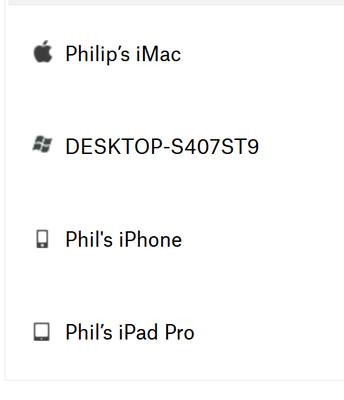 But you might argue anything over 3 and you have to pay. Not so....

"any devices you signed in to prior to March 2019 will remain on your device list, even if you're signed into more than three".

This isn't a new environment. This is the same Windows environment that I have always used. It's also exactly the same computer. I'll show you.

Look at this when I try to sign into the app on Windows. 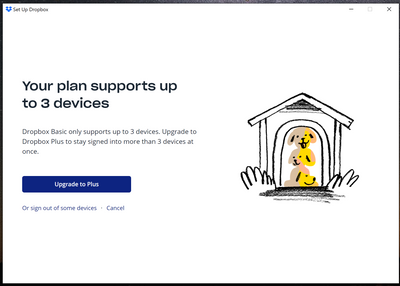 I get told I can't register a fourth device without paying...even though, my account already lists this so-called fourth device (see the first image). But here's where it gets weird...if I click the option to sign out a device, look at this... 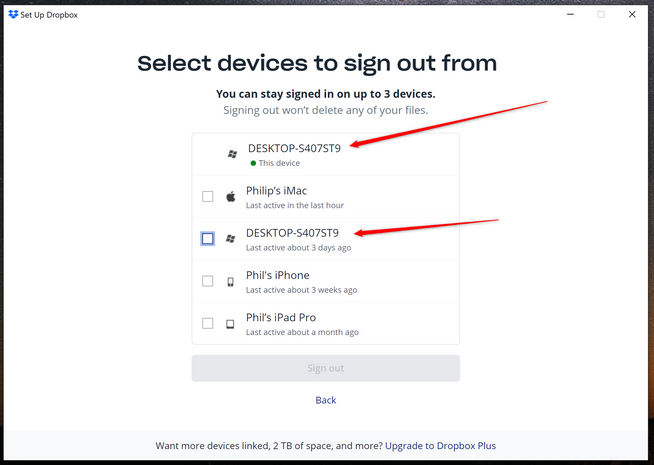 The device that I am currently sitting at (at the top) is EXACTLY the same as the one on my list of devices already on my account. It's there! I've used it for years! It just doesn't seem to understand that this is the SAME device I have always used.

Now...I know I could try signing out and signing back in again...only I can't even do that.... 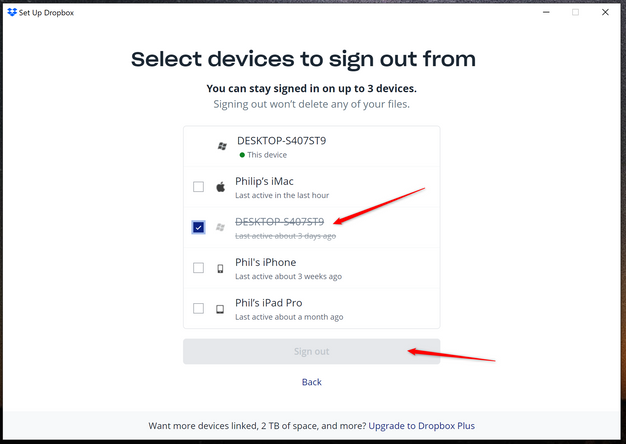 When I select the Windows environment in my existing device list, it won't let me sign out of it, even if I want to (see how the "Sign out" button is greyed out?)

I know on the website I could delete this device from my list of devices...but why? I don't want to remove an already listed device....I just want to start using it again.

If I delete it, then I am going to then be told I am trying to add in a new device...but I'm not! Even the Dropbox website *and* the app is showing me this is the same environment I've alwys used...it's just not letting me sign into Dropbox again via the app simply because I reset the same Windows environment I have always used and is listed.

I think it's got to the point that I need someone from the Dropbox team to solve the glitch...but for the life of me, I can't see how you actually contact staff support on this site?

Anyone? I still can't use Dropbox under Windows on a device that is clearly listed (already!) under my set of devices for my account.

1 Like
Share
Reply
Polls
Are you starting new work habits this year?
Vote
Hide Results
Well, we know it can be hard to keep up good habits, so we made a new working from home cheat sheet, with some good habits, some things to avoid and some tips for making your day a little easier. Check it out here.