I have one folder in a shared Dropbox that has not been syncing since the folder was added. I thought maybe it was because I was low on disk space. So I used Selective Sync to stop syncing files to my local drive from a variety of folders on Dropbox. That freed up space. But the folder I want will not appear in Windows Explorer at all. So I told THAT folder to not sync, then told it to sync again. Still not showing.

I was looking for help and someone said they fixed their issue by enabling Smart Sync. So I clicked that box.

Now Dropbox is downloading 27K files, and all of the stuff I did not want to show in Windows Explorer is now showing again. I just hovered over the DB icon and it said it was indexing a folder that I don't even want on my PC. Just hovered again and now it just says "Syncing" but no other info.

So aggravated with this! Did I do something wrong? I do not want all of this stuff showing in my Windows Explorer - I want only what I want. And mostly I want the ONE FOLDER that started this whole ting to show up! Which, even after all this, is STILL not showing (but I can get to it on Dropbox Online, so I know it's out there).

Would sure appreciate any guidance on this. Thank you.

And now when I go to Sync, it shows that maybe Smart Sync is off? And files added on web default is "local" (which seems to be what I want). But when I go to Selective Sync, every folder that's on dropbox online is now checked. I don't even know what to do that this point. Because guess what? the ONE FOLDER that started all this is still not showing in my Windows Explorer view of my Dropbox folder - but EVERY OTHER FOLDER IS. ARGHHHHH. 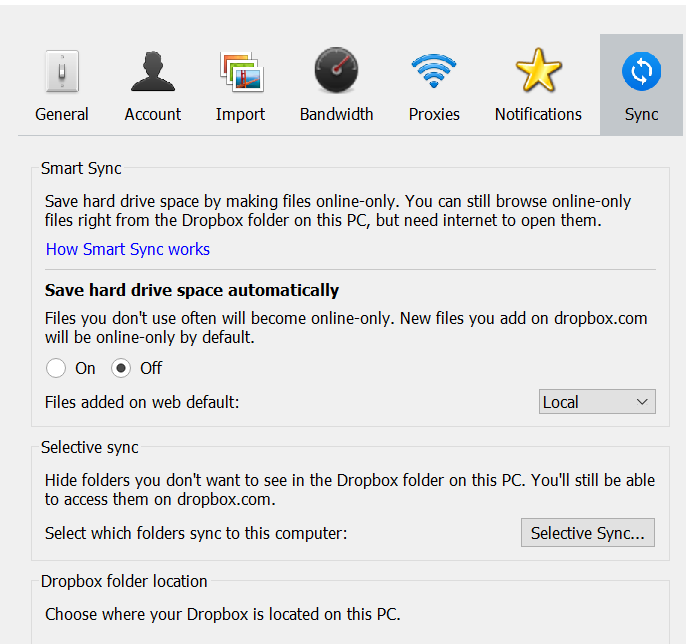 Hey @Margaret J.2, thanks for keeping us in the loop throughout this. I'd be more than happy to help look into this with you.

In general, when you check selectively synced folders to download locally again from your desktop app's settings and you have Smart Sync, those folders will sync as online-only.

Also, from your screenshot, I can see that the Smart Sync option to save hard drive space automatically is turned off, which turns content in your Dropbox folder that you haven't opened in a while to online-only.

As for the folder that doesn't appear in your Dropbox folder via File Explorer, could you check if the name contains any incompatible characters by any chance?

Finally, if you're still having trouble with syncing your files, could you let me know what you see when you hover over the Dropbox icon that's next to your computer's clock?

Hi, thanks for responding!

So, it turns out that I went around the bend to solve an issue that was caused by how the folder was named - it had ... at the end of the folder name and so would not sync to my Windows machine. UGH!!!

Now I have a MESS. After taking the time and trouble to pare down my Dropbox folder on my desktop, I now have 100 folders showing (and I'd gotten the list down to about 24, so it was much easier to manage). How do I go back to the way it was before? I don't want all of these folders showing on my desktop? Do I have to re-do the "Selective Sync" from scratch again?

Glad to hear that you were able to get to the bottom of your initial concern, @Margaret J.2.

You don't have to start from the beginning, but simply selectively sync the folders that you don't need from this point on.