Re: Dropbox: don't interfere with my MacOS sidebar!!

Hi, I'm at a complete loss as to how to REMOVE the Dropbox icon from the Mac Finder sidebar Favourites whenever I launch Dropbox (or restart my computer).  This has happened since version 131.4.3968.

How to reproduce issue:

1.) Right-click "Dropbox" in the Favourites and select "Remove from Sidebar"

Dropbox icon APPEARS AT THE TOP OF THE SIDEBAR AGAIN with no respect for user's own preference.  🤯

This happens if I replace step 1. with move Dropbox icon to another location in the Favourites.  Dropbox always recreates itself to be the very top menu item under Favourites, so it appears on the top of every window.  This is user-hostile and does not reflect a customer-friendly design.

Please revert back to the older behaviour in version 130! 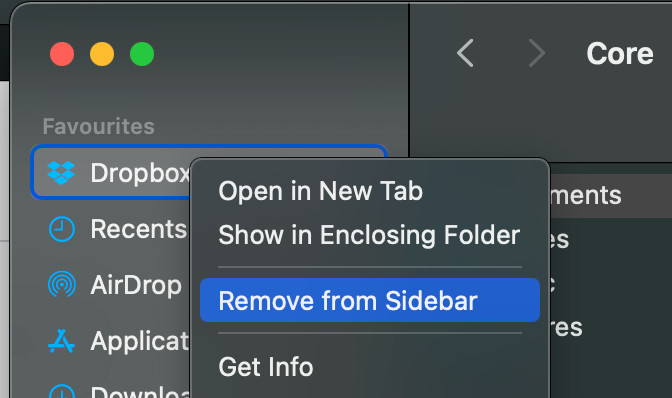 It worked for 9 days.

(I’ll now document what happened in the meantime, so other folks with the same problem might benefit from the potential solution, too).

I received support from @Walter via email where we did the following:

The problem was (according to Dropbox Support):

"It appears that you are running a beta (or experimental) build of the Dropbox desktop application. As beta builds are still in the testing process, you could experience some issues or an inconsistent experience."

For some reason, this solution only lasted 9 days, which makes it only a temporary solution.

In other threads on the internets, the problem was expressed as well, here…

How to get rid of re-appearing Dropbox Finder Toolbar button?
https://apple.stackexchange.com/questions/144575/how-to-get-rid-of-re-appearing-dropbox-finder-toolb...

This behavior is indeed annoying, and I’d rather spend my Saturday morning with something I enjoy doing, and not fixing/trying to buggy software 😞

Same issue here. Whether removing it or moving it to another spot on the Finder window Sidebar, Dropbox keeps moving the Dropbox icon to the top of the sidebar after every restart. This is very annoying and doesn't respect Apple's guidelines nor user preferences.

Thanks @naii for sharing, I'm afraid I'm not on early release so not sure why the behaviour has changed...  buggy software!  I'm on "Smart Sync update for Mac" though wondering if that makes a difference?!

Thanks @naii for sharing, I'm afraid I'm not on early release so not sure why the behaviour has changed...  buggy software!  I'm on "Smart Sync update for Mac" though wondering if that makes a difference?!

Just so there’s no misunderstanding… I unchecked the box that says "Include me in early releases" - unchecking the box solved the problem (at least for 9 days).

I am also having it go back to the top of the finder sidebar every time my computer is restarted. I move it down, it moves itself back

It happened to me. Really annoying. I tried to re-order my favorites for Dropbox but not working.

I have the same problem as well, appearing always first in the favourites sidebar even though I delete it or re-order it to lower position. I uninstalled and re-installed dropbox and it persists. I had already unchecked the box to include me in early releases so I was not and do not run a beta version.

Re: Dropbox: don't interfere with my MacOS sidebar!!

Dropbox, please don't do this.