I don't use Google Apps aside from Google Drive.

I just realized my Windows Explorer context menu (for "NEW") had been modified.

Based on the registry entries, the culprit is Dropbox. 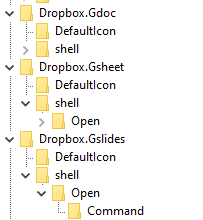 Why would dropbox suddenly decide to add crap to the context menu and not even (1) ask for a permission to do so, or (2) include the option of removing those shortcuts.

Yes, I know, I can hack the registry, but it's beside the point.

Why would dropbox do this? 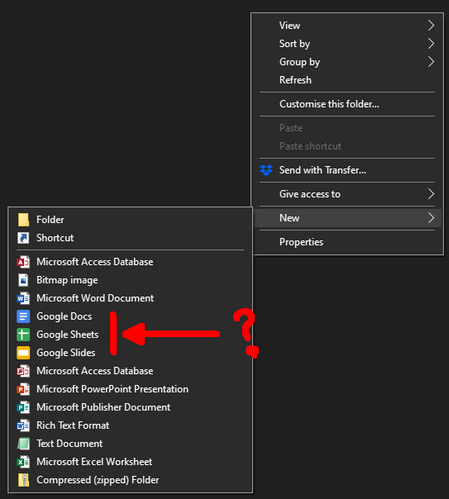 Can I ask if you have any Google Sheets, Docs, or Slides saved into your Dropbox account?

Also, what's the version and status of your Dropbox desktop application?

All files sync'ed. No errors.

Even if I had someone share a Google sheet, why would Dropbox suddenly decide to add shortcuts to any computer synchronizing files?

Thanks for looking into this.

Your feedback regarding this has been very valuable and I will endeavor to make sure your voice is heard.

Your comments on our Dropbox desktop application have been quite helpful, and I will do everything I can to ensure that your voice is heard.

If you need anything else, I'm here.