Not sure how to describe this, and it isn't really causing a problem, but it's puzzling me. It doesn't seem browser specific since I opened the file in both Brave (which I believe is based on Chrome) and Firefox with the same result. 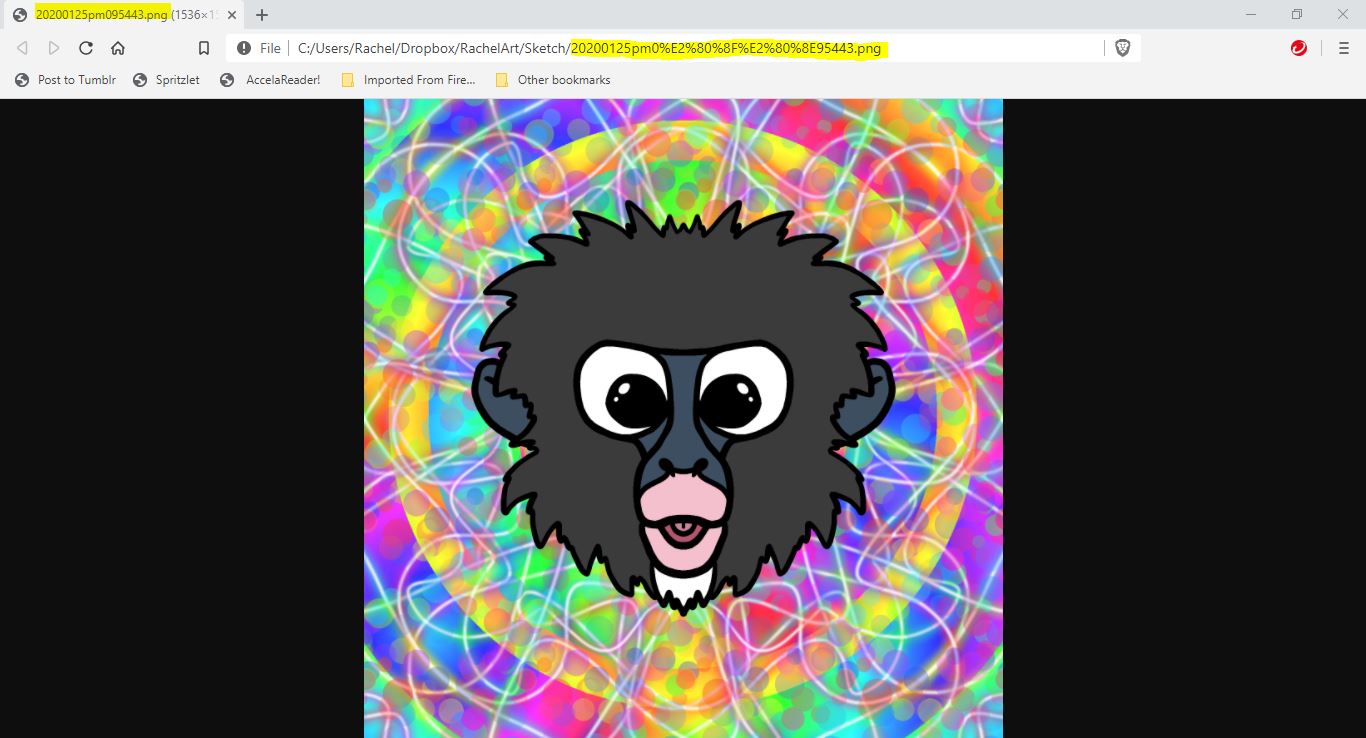 Yellow highlighted areas display the file name, when I opened the file directly from the Dropbox folder on my laptop. The name as it displays in the top left is the given filename (based on the date and time of the file). I just noticed, however, that the name as it displays in the address bar adds a bunch of new characters. It does the same with several other files in this same folder (I haven't checked other folders), but not all of them, and it looks like maybe it's started only recently, here and there.

The file name is correct in the Dropbox mobile app, desktop program (I don't use the desktop app), and Windows Explorer, and also in the file properties; it just changes when I open it in the browser.

I tried omitting the new characters in the address bar and navigating to what SHOULD be the file name but it told me no such file exists.

All these files, both those whose names display properly and those whose names have new characters, I saved them to my computer and Dropbox in the exact same way, just different days. They originally had different names; I renamed them manually with the date/time (but without all these added characters).

New characters weren't added to the originally named versions of the same file in different folders. (I have a few different copies.) Only the renamed ones, as far as I can tell.

Where are these other characters coming from and why...?

Labels
0 Likes
Reply
a
a
4 Replies

Somehow you had inserted in your file name, two direction mark symbols (invisible - that's why you cant see them in other places, but they are there). That, what you see on you web browser(s), is encoded form ( utf8 ) of the two symbols, which make them visible.

While such symbols exist in some file name (either visible or not), they are mandatory and when you remove some - filename becomes invalid! In address line only ASCII symbols are represented directly all other get encoded.

Hope this adds some clarity.

That's strange, I can't figure out how I would've done that. I manually type the file names in Notepad and then copy/paste them as the new file names in Windows Explorer. 🤔 Where do the symbols come from if I haven't typed them...? Plus it only happens in some files and not others.

(Sorry if I sound like an idiot, computers obviously aren't my thing.)

The file name is correct in the Dropbox mobile app, desktop program (I don't use the desktop app), and Windows Explorer, and also in the file properties; it just changes when I open it in the browser.

@Rachel L. wrote:
... I manually type the file names in Notepad and then copy/paste them as the new file names in Windows Explorer. 🤔 ...

Can you find something strange/inconsistent in your statements above?! One tip - you don't use desktop app and Windows Explorer, but try still fix the issue typing, copying, pasting and so on in your Windows Explorer!?

Try set name (no any copy/paste or similar) explicitly removing every old symbol (either visible or not) in your account (i.e. starting here). Using copying or editing partially, could left some invisible symbol there! For more information about both symbols you can take a look here and here.

(Sorry it took me a bit to reply.)

I prefer editing these files in Windows Explorer to maintain the "Modified" date for sorting/organizing reasons; I believe if I rename them through Dropbox it'll change that property to today's date. (Sorry if I'm misunderstanding what you're saying, I'm not very computer savvy and still don't entirely get it. 😳 )

I thought perhaps I figured out where the invisible characters are coming from, but just proved that theory wrong so it's still a mystery to me. (Notepad is probably to blame.) I did find a site that displays them (it calls them "non-printable unicode characters") so I can manually edit them out, though.

Since this seems to be a Windows(?) issue rather than Dropbox, I suppose I should mark as solved. 😳 Thank you!