Need support with viewing, downloading, and exporting files and folders from your Dropbox account? Find help from the Dropbox Community.

As a Dropbox fan, Google Drive has always been a nightmare to me, due to its unstable download speed, horrible syncing app, irrational sharing logic, etc.

I used to be able to transfer files directly from Google Drive to Dropbox using the Dropbox's native feature on Jun 18, 2022. I thought it was the day to end the Google Drive nightmare, but unfortunately the next day Dropbox took this feature away.

I have to say this feature is so critical to my Dropbox using experience. As my business partners always use Google Drive to share large files every day, and I use Dropbox to store all my own files. In the past, I have to install third-party app to my Google Drive to allow the files stored on Google Drive to be downloaded to the server provided by the third-party developer, and then they upload the files to my Dropbox account. During the process, files from both Google Drive and Dropbox have a high risk of being exposed to a third party or even leak to public. If Dropbox could establish a direct tunnel with Google Drive, I will be more confident to transfer files. Sometimes the files our business partner shared need not to be downloaded to local computer, and only need to be stored on cloud. That's where this direct-transfer feature becomes especially useful.

Hey @civon, thanks for posting on our Community!

Could you please clarify which Dropbox feature you are referring to and provide some additional information about your use-case and what exactly you'd like to see implemented?

TL;DR version: I wish Dropbox could bring back this beta feature and make it permanent. @Walter 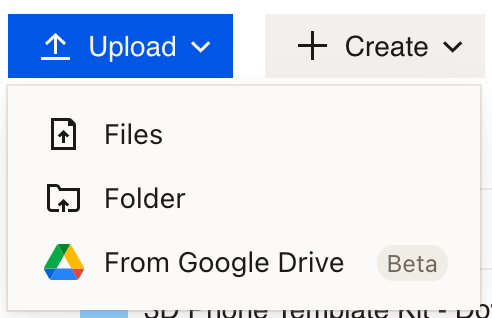 Hey @civon, I hope you don’t mind me jumping in here, and thanks for your screenshot!

I’ve already passed your feedback along to the relevant team, so that they know about this.

Hope this helps, and if you need something else, I’ll be around the forum.

Is there any news about bringing this feature (uploading directly from Google Drive) back to Dropbox?

Hello @jennaV, sorry for jumping in.

I am afraid that, we do not have any updates to share at this moment, but we will make sure to keep you posted.

Thank you for your continued interest in Dropbox.