How we use Dropbox: Laureline

How we use Dropbox: Laureline

Amy
Community Manager
As you may have seen, we love to share how our Community members use Dropbox, and we thought it would be fun to tell you how some Dropboxers use it too! Next up, we have @Laureline, Community team superstar. Check out how Laureline uses Dropbox to keep in touch with friends and maybe solve a murder…mystery.
“I’m part of a close knit group of friend of 4 people, previously all based in Dublin, Ireland. One of us moved to Seattle, and due to the pandemic, he couldn’t visit his family or friends for Christmas so to bring a little bit of joy in his life, and because he’s a massive fan of board games, we decided to find a board game that we could play over video chat.
We picked a game called Detective - a game where you’re supposed to investigate and solve crimes across 5 different mysteries. The game itself is complex enough: you have cards, maps, clues, an online database, and you’re supposed to keep your notes from one investigation to the other. It was not designed to be played remotely — but it looked really fun and we felt we could make it work.
What actually allowed us to play the game over Zoom was just the fact that we used Paper.
It was quite awesome — one of us (A, who had the physical board game), would read the cards, manage the board and the physical clues. He would take a picture of every clue card, and paste it in a table on the Dropbox paper thanks to the Paper mobile app. Another player, V, would manage the online database — with fingerprints, biographies, etc. And 2 of us would take notes directly in a Paper doc that was shared with all of us.
After a bit of consideration on how to structure the Paper doc, we created different sections to organize our thoughts. The fact that all of us could add, adjust or sort content in every part of the Paper doc was incredibly helpful, because we had one source of truth. That one source was easily searchable and browsable, and we managed to make it visual with color coding. Having a picture of every clue was essential, especially considering we were more than 7000 km apart  😄
Check out our research below.

A table for all of our clues, organized by the number of the clue (they were numbered in the game). We were able to sort the table (by using emojis) in order to sort the leads that we already took, from the ones we still had to explore, which was super handy during the game. 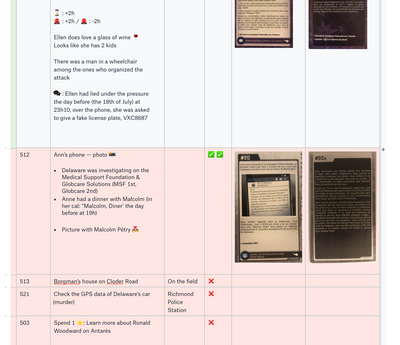 A table for every person of interest. We color coded it whether they were deceased, a key suspect or of the same family.
We searched the doc (‘ctrl+F’) probably a thousand times during the game, which made note taking a million times easier than if we had had good old fashioned notebook and pen. 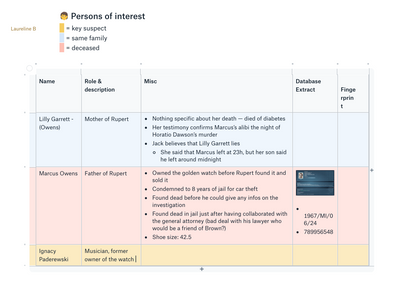 A timeline, where we recorded events that we believed were important for the investigation 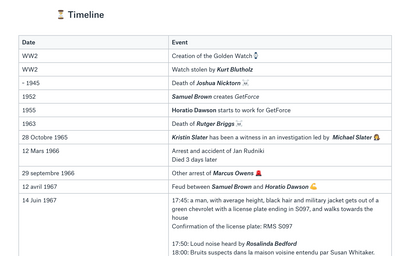 The timeline
We had loads of fun, and ended up playing for almost 30 hours together 😅
I loved how Paper helped us to turn an in-person board game into a game that we could play remotely. In the middle of a global pandemic where no-one can travel, it helped us to create some really awesome memories with some of my best friends, which was honestly incredibly wholesome and heartwarming.”
Thanks Laureline! I might just have to wrangle some of my own friends into an online board game - there’s only so much Among Us we can play after all.
Do you use Dropbox to stay in touch with friends? We want to hear your tips and tricks as well, so join the conversation below 😁
8 Likes
Reply
2 Replies 2

Re: How we use Dropbox: Laureline

Now I wanna know - anyone else ever used Dropbox (even in a crazy or weird way) to play board games?

Come on D&D players, I'm sure there's a ton of you in there 😬

Re: How we use Dropbox: Laureline

Kittisak201716
New member | Level 2
Thank you so much
1 Like
Reply
Poll
How do you get refocussed while working from home? Do you find any of these options keep you from getting distracted?
Show Choices
Hide Choices
If you’re looking at this thinking ‘None of the above’ then you can check out our helpful focus tips here.