Dropbox does not recognise the Edge Browser

Dropbox does not recognise the Edge Browser

I have reinstalled Dropbox to see if a pst problem has resolved itself.  Unfortunately not.  I am saving a file to Dropbox locally from RootsMagic genealogy program. It brings up a Dropbox link stating that my Browser is not supported.   The Browser I am using is Edge with some added security.  This is the same set up I have been using for years which Dropbox has previously accepted.   I have stripped out all the extra security and found that Edge is still not recognised so I reloaded Edge from the Dropbox link but, again, Edge is still not recognised.

I contacted the Rootsmagic forum who have advised that recently the Dropbox API has become unstable.  A workround was suggested to directly save the Rootsmagic file to the local Dropbox App folder. This is all very well but despite that App folder being selected in the Direct Sync folder no upload of the updated Rootsmagic file.

Is there an API problem and, if so, when is it likely to be resolved?

The Dropbox web site should support Edge, including for the API app authorization flow. Can you provide a screenshot showing this error in Edge so we can get a better idea of how this is failing? In the screenshot, please be sure to also show the URL of the page. Also, please share a screenshot showing the "Help and feedback" > "About Microsoft Edge" page showing the exact version of Edge you have installed so we can investigate. Thanks in advance!

Thank you for your quick reply. As requested, please find attached the required screenshots. Please let me know the situation soon. 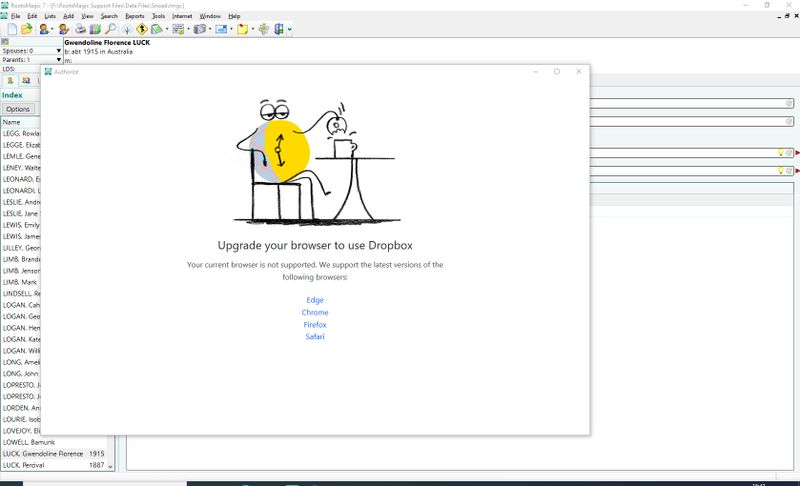 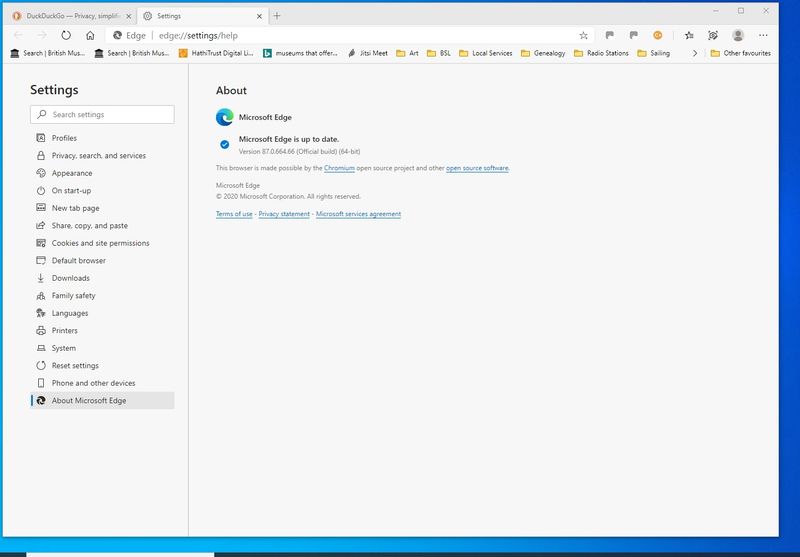 Are you sure you have used a component coming from the Edge browser? There is no any confirmation on this in the screenshots you have posed! What is going on if you try to login your account? 🤔 If you open a local HTML file, what is the browser where this file gets open in automatically (Edge or IE)? 😉

No, as explained I am using a genealogy programme which links to my Dropbox storage account by calling up Edge as an intermediary.  This is a standard link within the Genealogy programme used many times over the years before this. Lately the error message from Dropbox has appeared stating that my Browser is not recognised. This message is consistant even when I reload an updated version of Edge. Screen shots of both are shown.  Edge correctly opens all hmtl sites and pages.  When I log into Dropbox I find older versions of my genealogy files which have not been updated.

Checking with the Support of the Genealogy programme they advise that Dropbox have been having trouble with their API recently; hence my enquiry.

None response to my questions could be seen on screenshots you provided nor from your explanation! For example, I didn't ask if your Edge browser can open/handle html files or links, what you are tolk about! I don't have any doubt about this. Read more carefully, if you want of course!

@G S.3 Thanks for the screenshots! From the first screenshot, I can see that the third party app you're using is actually presenting the app authorization flow inside a "web view", and not your actual system browser. Processing the app authorization flow in a web view like this is not officially supported, and can lead to compatibility issues like this. (Web views don't necessarily use the same browser engine as your default system browser.)

This is something that the developer of the third party app will need to update the app to correct, so you may wish to contact them to request that they do so. For their reference, the relevant documentation can be found here.

Thanks everyone for their input and to Greg for his analysis.  Have contacted the Author of the app with your comments so, hopefully, a correction might be made soon.