with the following json parameter:

After executing the method I receive the following JSON response:

Which seems to be as expected.

Since there's no documentation to be found on how to fetch the status of the async job using REST calls I've no idea how to proceed.

That link doesn't lead to something useful:

The group I want to remove has the following attributes: 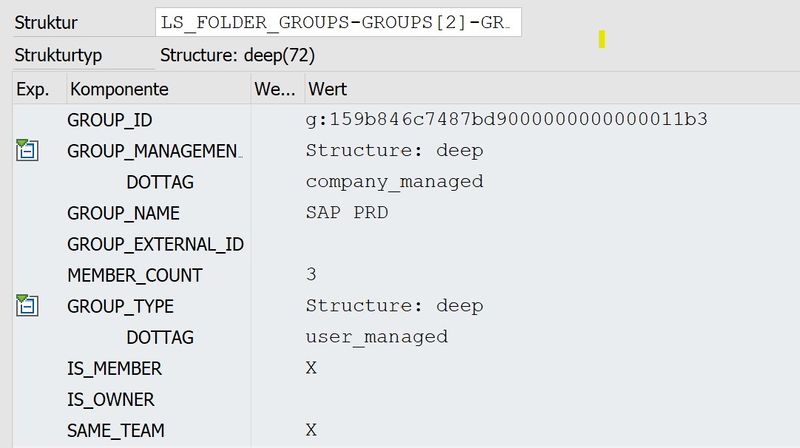 (ABAP language doesn't allow field names starting with a dot, so "DOTTAG" here actually refers to ".tag" which is mapped during the JSON deserialization)

Adding a group to a team folder is pretty much useless without the possibility to remove the group.

I'm afraid to ask for assistance once more 🙂 🙂 🙂

Apologies this isn't better documented; I'll ask the team to fix that up.

When you get an async_job_id back from /2/sharing/remove_folder_member, you should call /2/sharing/check_job_status to see the result of the operation, e.g., if it completed successfully or if it failed and if so why. Please give that a try and let us know if that doesn't seem to be working properly.

thank you very much. I've implemented an additional method to fetch the async job status which works very well. And, also the group has been successfully removed from the team folder.

I've one last (and very important) question, out of above topic:

Is it possible to retrieve the exact DBX time which is used for the "server_modified" timestamps? (Pls. remember, only REST calls via HTTP are possible)

I want to sync files/folders between SAP and DBX.

Each file/folder has a timestamp in DBX as well as in SAP.

After the initial upload SAP -> DBX, files/folders may be changed in SAP as well as in DBX.

These timestamps rely on the SAP internal server clock and the DBX clock(?) I guess, DBX will have some central time management?

Anyway, as both clocks will differ, it will be difficult to discover which file/folder is the current (newest) version when comparing these timestamps.

So it'll be essential to compute the difference of SAP clock and DBX clock right before comparison.

Currently I upload a dummy file into DBX and fetch the metadata afterwards (server_modified_time), but this looks a tad clumsy 🙂

Do you have any idea for a smarter solution?

@1575475 Dropbox does not offer a way to check or sync with its own clock. I'd suggest you use whatever standard time synchronization service is available to you on your platform (e.g., using NTP). You can find the documentation for the date format that the Dropbox API uses here, and a guide about Detecting Changes here.

since now everything's running fine I'd like to thank you again for your help.