Solve issues with deleting, editing, and organizing files and folders in your Dropbox account with support from the Dropbox Community.

Do you have the ticket ID in order to locate it on our system?

Thanks for the ticket ID and sorry to jump in here @rachoo78 - I hope you don't mind.

I just wanted to mention that I've found your ticket in our system and passed your comments on to the agent handling your request.

I can also see that they've replied back to you there, so please take a look at your inbox for their message.

Let us know if you have anything else to ask or add in the meantime.

I appreciate you following up with this.  However, I did see the latest reply and basically they are telling me that I didn't save or sync properly.  I don't know how I can have access to those files between Dec 2021 and June 2022, and now everything reverts back to Dec 2021 and all my edits are lost since then.  Everything was syncing and saving perfectly fine between Dec 2021 and June 4, 2022.  Dropbox did something to my account after June 4, 2022 that erased all my edits.  I am DONE with Dropbox.  I've cancelled my upgrade service, uninstalled my desktop app, and moved all but 2 files to One Drive and an external hard drive.  I'm hoping somehow my edits on those 2 files return, but if they don't, I'll cancel my account.  My data is not safe with Dropbox.


I don't know how I can have access to those files between Dec 2021 and June 2022, and now everything reverts back to Dec 2021 and all my edits are lost since then.  Everything was syncing and saving perfectly fine ...

Just to point out that you would have had continued access to all of your files in the Dropbox folder on your computer, and you could continue to save your files there as you likely always have, but if the Dropbox application wasn't running, then your files wouldn't be syncing to your account. From your view, everything would have looked normal if you only ever worked out of your local Dropbox folder.

Given that you can't see anything right up until June - If you can't see any event in your revision history (and even the most basic account has 30 days), then this suggests you were not syncing to Dropbox.

Even in the inordinately unlikely event (since Dropbox doesn't overwrite newer files) that you have suddenly become "online" after not syncing since Dec 2021, and the online-content of your Dropbox has overridden your more recent files, then you'd still see this mass event in your revision history, and should consider having the Dropbox team revert your account (or use rewind) to June 1st before this sudden event.

So if none of that is the case - which i suspect is true - then you've done something at your end, and should probably contact a data recovery specialist ASAP.

I've been using Dropbox since 2009, in the most niche of scenarios such as deleting files & / or folder, creating files/folders of the same name, then relocating them, and changing the directory hierachy, throughout all the API versions, and I have never lost a single file or revision that wasn't either entirely my fault or entirely recoverable through Dropbox.  I've painstakingly built processes based on situations so far down the scenario-chain that they are unrealistic, and frankly, Dropbox simply doesn't just delete data.  It does one of three things:

1. It updates a file (leaving the previous version available in version history),

2. It deletes a file (leaving the file and it's version history available for recovery).

3. It creates a conflict file where it's unable to determine the most recent version.

One thing it doesn't do is just suddenly revert a persons dropbox without any trace. - Even if you (or Dropbox) reverts a file or folder, the current version being replaced or overwritten is still saved in the version history.

Dropbox will be able to tell you your sync activity, and you can be fairly certain there's no "bug" in those logs that wouldn't have otherwise affected millions of other users if present.

rachoo78
Explorer | Level 3
I’ve been working with Dropbox support on this issue since June 19 and they haven’t been able to tell me my sync history. You have just told me more than they have and you seem to know more than any other support person I’ve talked to. I appreciate it. I guess if my files weren’t syncing for 6 months and then an event happened to revert all my files back to Dec 2021, then Dropbox isn’t secure or safe and has a bug. No other program I know could let you continuously save files and access them and make it look like they are saving but really they aren’t. It’s very deceptive on dropbox’s part to offer a program like that. I was out of the country when Dropbox got updated, so it wasn’t my doing. Dropbox did something on June 8 to revert my files back to Dec.
0 Likes
Reply

@rachoo78 I've worked with Dropbox support on a couple pretty complicated issues, and while it may take up to a day or so between some responses, they've always been able to drill into the nitty gritty.  I don't understand why it's so hard to see your sync history.  Just go to https://dropbox.com/home and view any files revision history.  Alternatively, click "Rewind".

You might wish to do this right away if you're on an account that offers 30 days revision history.

You can see file activity based on the date range selected, for example: 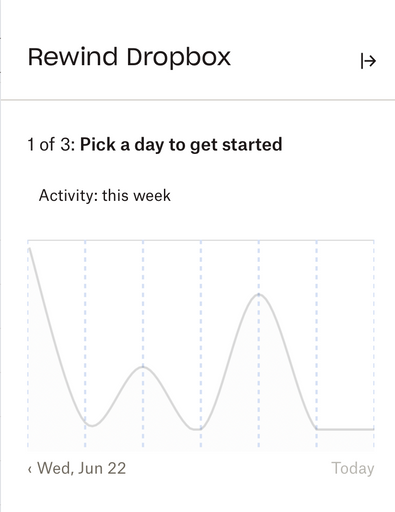 rachoo78
Explorer | Level 3
I’ve already tried that. I’ve gone to “version history” and there are no dates there except Dec 2021. Even though I updated this file everyday with the last time being June 4, 2022, the only date I can rewind to is in December. Dropbox just keeps telling me that I haven’t touched that file since December. It doesn’t think I’ve accessed Dropbox at all since December. I’ve always used Dropbox to move files between my computer and my phone with no problem, until now. It’s like Dropbox reverted my account back to December for some reason. I even had a professional IT company remote onto my computer and they said Dropbox did something to my account to erase content. I’m never using Dropbox again!
0 Likes
Reply