I found a hidden file called .dropbox.device on a disk partition of one of my internal hard drives.

Can someone please demystify this file for me? I would like to know exactly what this is and what it's used for. Given all previous user accounts of this file, I know it is created by Dropbox. I will post some reference links below.

I can see a .dropbox.device file in one of my shar... - Dropbox Community

Solved: dropbox.device getting installed on my USB - Dropbox Community

It is suggested that this type of file is generated by Dropbox when inserting a USB flash drive into a computer with Dropbox installed on it, and the solution is to disable camera uploads so that the Dropbox app on a mobile device cannot upload pictures to Dropbox. I can't make much sense of this (these?) argument(s). For one, I have never used this internal hard drive in an external context (USB hard drive enclosure), and I don't allow the Dropbox app on my mobile device to upload the photos I take. (I have even stopped using Dropbox altogether on my mobile devices some time ago, when the number of devices that are allowed to sync on the Free plan was crimped to three devices or so.)

Regardless of how someone uses Dropbox, or the number and type of devices they use Dropbox on, these hidden files should have an explanation of what they are and what they are used for. It needs to be documented somewhere instead of playing the guessing game like we do. You don't just drop a bunch of cryptic binary files on someone's desktop and pretend like it's an honest mistake made by your app. I don't need to tell you that this is done so by design.


I found a hidden file called .dropbox.device on a disk partition of one of my internal hard drives. Can someone please demystify this file for me?

It's used to identify a device and remember settings you've specified for it, such as for camera uploads, and whether you've told Dropbox to import files or never ask to import again, etc. It's not just for external drives, meaning externally attached, drives. It could appear on any drive you've added to the system. It can be ignored.

What happens if these files are deleted?

What a strange place to store device related settings I must say. Why can't these settings be stored in the Dropbox app installation folder? Also, why not use a plain text configuration file rather than this proprietary binary format that only the Dropbox app can read?

If I understood this correctly, I can't simply tell Dropbox "don't include hard drive J and K in your sync/camera-upload/backup operations"? It has no capacity to remember locations by using search paths like "J:/" and "K:/" so it accomplishes this by dropping some binary files at those locations?

If you delete it your Dropbox will unlink and you'll need to reconfigure/setup etc.

Well, I was only able to find one of these files and only on one of the hard drives. I have deleted it less than 24 hours ago, but thus far Dropbox client has not asked me to make any setting changes and it appears to be working as expected, no issues whatsoever.

This is a 56 byte file. It does not take up much space. But I just hate programs that have this tendency to poop all over the user space. It's normally none of my concern what this file is or what it does, I could not care less, as long as the program works as expected and it keeps its files to itself. But when these mysterious files litter all over my work area that makes it my concern. The user should never be the one having to clean up the mess after programs like this.

Coincidentally, I found one more of these files lurking on one of my old USB flash drives. This file is also 56 bytes. It seems as if they are all the same.

I think these are old files that Dropbox no longer uses (delete if you like).

I found evidence earlier today that supports the idea that it's the automatic upload feature of Dropbox that keeps adding these files. I was transferring some photos from a memory card of my DSLR camera to my computer when I got this prompt from Dropbox on Windows, asking me if I would like to import these photos to Dropbox, with the additional option to "include videos for all devices" (a permanent setting hidden within the dialog box for a one-off and device specific event, sneaky!). 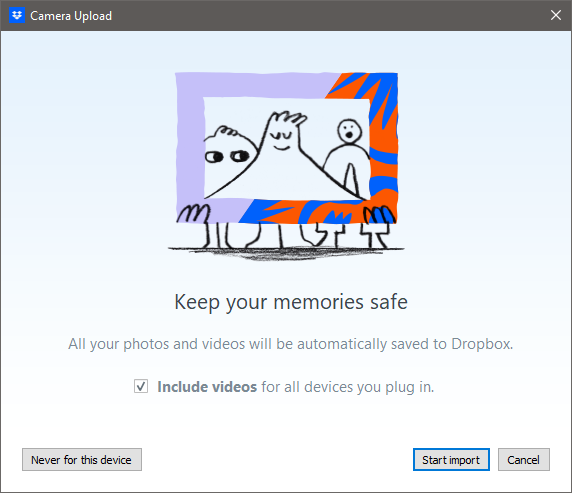 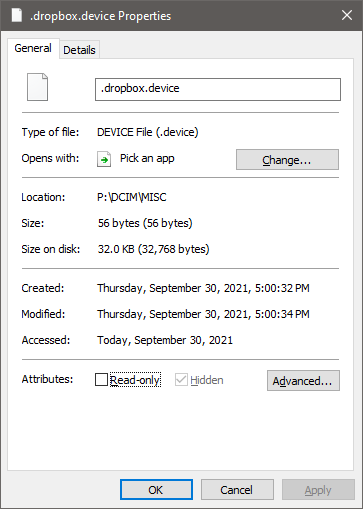 I selected "Never for this device" and deselected "include videos" checkbox. Then I noticed a new file popped up in the folder on the memory card, with current date and time stamp, and it was named ".dropbox.device".

It kept coming up for all the memory cards I kept inserting in the card reader. One way to get away from this annoying prompt is to disable AutoPlay for memory cards in Windows system settings, or to set it to something else, some other app, something other than Dropbox. It can't be set within Dropbox itself, but there is a link within the Dropbox settings to bring up the right page for Windows system settings. I have set it to "Take no action" on my computer. Time will tell if this is enough. I don't use Dropbox to backup my computer, so I wish it was possible to disable the whole Backup section directly within Dropbox settings. 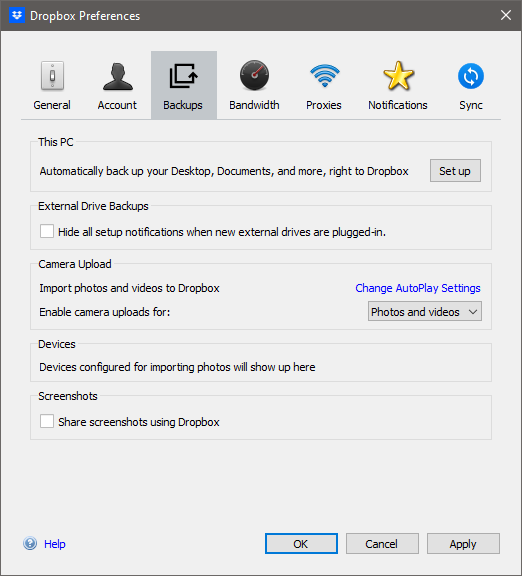 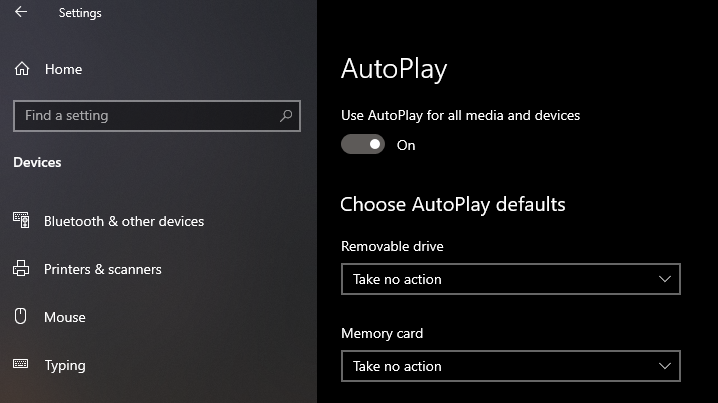 1 Like
Reply
Poll
Which Dropbox Plan do you have?
Show Choices
Hide Choices
Would you be interested in learning more about the benefits of your plan? You can check out Basic here or search for Dropbox Plus. Keep your eyes peeled for Dropbox for business content too.