Hello, my team and I are having trouble with our Dropbox files. As you can see in the image below, there are tons and tons of these Selective Sync Conflicts, all of which were created today. Most of these folders are completely empty, and they are all showing up on the top level of our DropBox account, when they were previously inside of other folders. On top of this, there are tons of files also stored in the top level of Dropbox that have Selective Sync Conflict after them, and at one point these files were missing from their original folders, but they seem to be back now. On top of this, tons of files and folders are still missing from inside our top level folders. I went into the deleted files section and restored a ton of files that were deleted for some reason, but there is still lots that is missing. We are not sure what caused this all to happen. I was moving someone to a new computer and when I set up Dropbox I modified the selective sync like I normally would for anyone else. Sometime during this process a message popped up asking if I wanted to move the files, it mentioned something about a "team folder", I don't know what files it was trying to move or anything, so I hit cancel on it and didn't think much of it until all of the selective Sync errors showed up. I then logged out of the account on that computer. I don't know if these things are all connected or just poor coincidences. 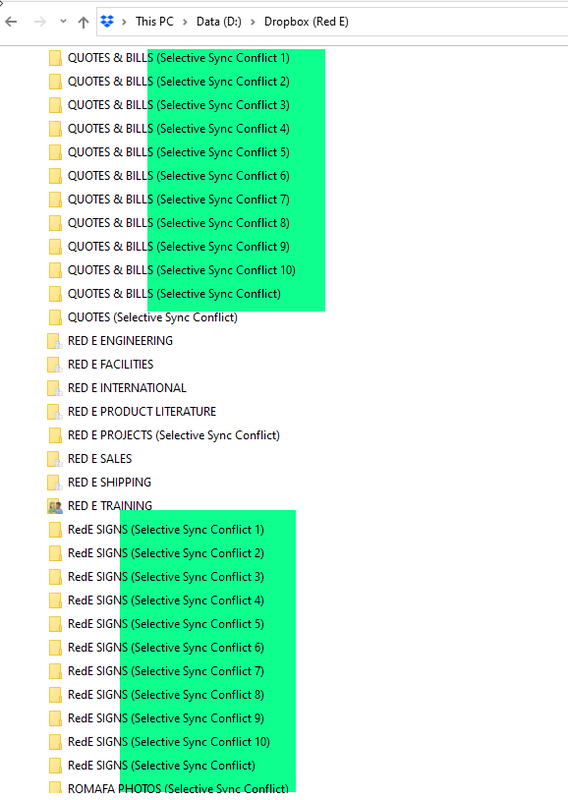 Hannah
Dropboxer
Hey @Red E, thanks for joining our Community and happy Friday!

Have you taken a look at this article, to see info about selective sync conflicts?

It will explain how it happened and what you can do to avoid it.

Let me know if you have any questions.

I did read that article, but unfortunately I do not see how that caused these problems. All I did was install DropBox, and turn on selective sync during the install. There was no removing folders/adding folders, and that doesn't explain why there are so many of them. On top of this that article says the files should be safe but most of the selective sync conflict folders are empty, and the originals are missing files.

Jay
Dropboxer
Hi @Red E, it's possible that when trying to remove the original folder, an existing program is still using a file inside that folder and so can't have it removed from the system, which would then create the conflict.