Need support with viewing, downloading, and exporting files and folders from your Dropbox account? Find help from the Dropbox Community.

For years i've been using the "make available offline" feature on my iPhone (latest ios/updates). I'm a musician and always dump demos into a folder to listen to on the go. It's always set to "Make Available Offline". For years it's been fine but for at least the last few months new tracks aren't uploading like they used to and one's that have been there for years are constantly in an uploading queue. I'll be away form wi-fi and There will be Yellow Triangle symbols beside each file with an exclamation inside always telling me to "refresh for update" which sometimes doesn't do anything. here's a couple screen shots of what i see every-time i go to use it . First there's the yellow triangle and then sometimes it goes to downloading EVERYTHING... It's always in this process. very annoying. thanks 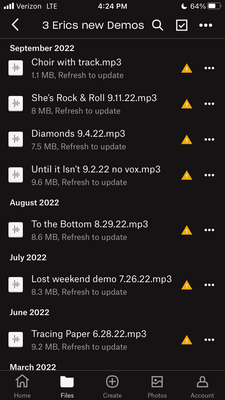 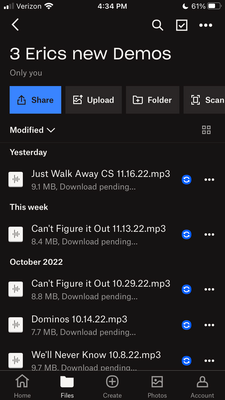 MS Word will not save offline changes back to Dropbox

I have recently encountered an issue with MS Word on the iPad not syncing changes made offline to Dropbox.

What happens is this

2) While offline I make edits [sometimes a lot 😞 ]

3) When I return to a known wifi network and open Word again, it retrieves the earlier saved version of the document, and the changes made while offline vanish

Has anyone encountered a similar issue, and found a solution?

Which Dropbox version do you use on your iPad? Have you tried cellular data in order to update your files, and to see if the problem persists there too?

If I were you, I'd also try to clear the app's cache, from its settings.

Let me know more, and we'll take it from there!

hi - not finding any options to dump the Cache in the iPhone settings.

Hey @Uneze, could you try navigating to the “Personal” or Account tab in the mobile app and then tap the gear icon in the upper-left corner of the screen?

From there, you should be able to select “Clear Cache”.