Re: How we use Dropbox: Planning a wedding

How we use Dropbox: Planning a wedding

Amy
Community Manager
We’ve covered lots of big life moments in our ‘How we use Dropbox’ series - and now I have another one to add to the list. Not to make it all about me, but I recently got married and used Dropbox to keep the planning easy and as painless as possible, so here are some handy tips I used to make life easy for us.

Planning a wedding with Dropbox:

We got engaged during lockdown, and it wasn’t long before we realized we should have taken advantage and tied the knot when we could only have a handful of people there, because there is a LOT of planning that goes in to a wedding, even if it’s a chilled out and small event. We were lucky enough to have a very cool venue offered to us by a family member, and loved not having to include that on the list of the decisions we had to make. But even with that off the list, we had to factor in all of the below:
So, because I am not a bridezilla, my husband was just as involved as me on these things, and step one was making a list of things we knew we did and didn’t want - just to get us started, like: 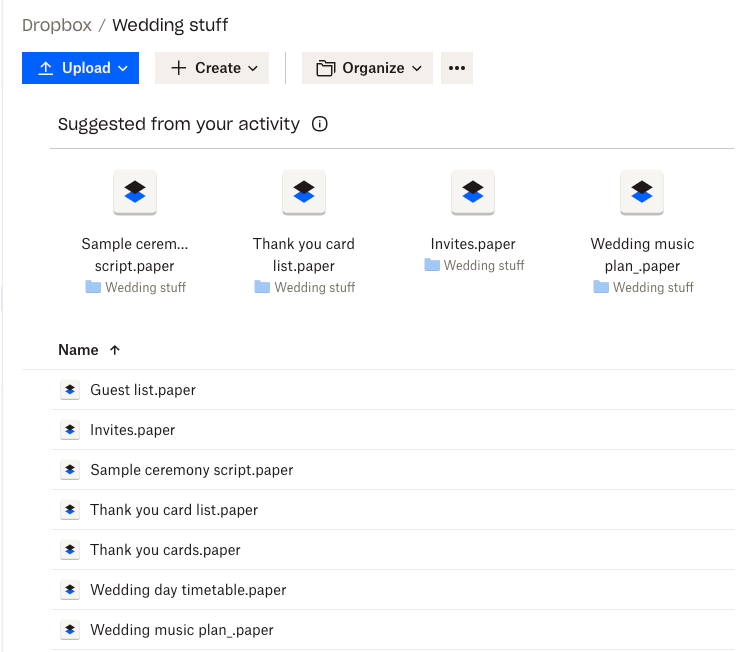 From there, we moved on to guest list, and using Dropbox Paper we made a shared doc where we could add people as we thought of them. With the Paper app it was easy to do that on the move, when we remember a whole section of the family, or find out a friend is going to be on the right side of the planet that weekend. This list was evolving right up until the week of! We also had a folder of inspiration on the design of our invites, and eventually where we had the files for printing stored, again so we could add to them whenever, and wherever we were.

We also used Paper to share our thoughts with our caterer, who wasn’t too familiar with Dropbox but he was able to view our Paper doc, where we had links, images, and descriptions of what we were hoping for, to cover the fact that we had some veggies, some vegans and some absolute carnivores, so balance was key. By the time we finished up with him, he was tagging us in the doc, adding to-do lists for himself and even creating a timetable for his staff too! We eventually did a buffet, with over 16 options of dishes and trying to do that without management would have been wild.

We always like to share a list if we’re traveling with a group, using Dropbox Paper to share ideas for the trip, create a list of things to pack, and put together a possible travel itinerary. We wanted to make sure no one had to travel alone, so we created a spreadsheet where people could input their travel plans. We got married in France, and making sure folks could travel as a group or rent cars  together helped us to make it easier on our guests. We also created a bank of fun things to do in the area.

Photos of the big day:

After the wedding, we created a shared folder to upload the photos to - with varying rates of success. Turns out the quality of photos degrades after a certain hour and a certain number of drinks, but it’s lovely to have all of those photos in one place to review. We followed useful tips on how to organize photos in Dropbox to help arrange the albums too. I was surprised at how few calls I got from my older relatives about the photos link I sent around - it was a painless process! We also have a back up of the recordings people left on our phone guestbook, and the plan is to get that pressed into a record at some stage soon.

And of course, we had a lot of thank you cards to send, but between the kind wishes before, during and after, we were terrified we would forget someone. Naturally, we had a list of those too - which we could tick off one by one on the to-do list, hands cramping but consciences clear!
Well, enough about me - I would love to know how you use Dropbox for events, or even weddings too!
3 Likes
Reply
1 Reply 1

Re: How we use Dropbox: Planning a wedding

This looks amazing, Amy! I have a few friends with weddings coming up and I'll definitely share how you used Paper to organise everything!