My Dad has done something to his dropbox account which has got his system into quite a state, and I haven't been able to figure out exactly what he did or how to fix it.

A few days ago suddenly what has happened is that somehow he now has a "My PC (MachineName)" folder appear in his online dropbox folders. And it is trying to sync an enormous amount of data off his PC - so he immediately paused the sync feature. Every time he tries to resume no matter what we do it continues on trying to sync up data from his computer.

Spent an hour remotely connected to his PC trying to figure this out and failed. Incredibly frustrated. He has no idea what he did (elderly and not a computer whiz) and me as a computer geek can't figure it out either, just concluding that Dropbox has some appalling user interface aspects to it in this scenario or is buggy as heck.

How do we get some support to get this figured out? Dropbox is completely unusable in it's current state, he is very close to blowing his storage limit from all the garbage it is trying to push up and there seems to be no way to cancel whatever the heck it is it thinks it is trying to do???

Well after many more hours of remotely connecting and mucking around I think we finally got it sorted. I tried the restore default folder location stuff, had all sorts of "reaparse" errors and similar nonsense, finally got the Pictures, Documents etc folders all pointing back to where they were supposed to be.

However having done all of that there was still the "My PC" folder in the dropbox folders and on his account, that refused to go away, and trying to delete files out of it resulted in them being synced down from Dropbox again.

In the end in desperation having seen a suggestion from someone else I turned Backup "on", just so I could then turn it "off" after it got though the "settings" phase. And *finally* got the reassuring message we have been wanting of it saying that it would remove the files from Dropbox and they would only be available locally. And so then I could just delete the local My PC folder and at long last Dropbox is not trying to sync thousands and many GBs of files that my Dad never intentionally at least somehow had happening.

Had I not uninstalled/reinstalled the dropbox client, then possibly we would have had the "Manage" option available on the Backups tab. There is clearly an undesirable "feature" in this scenario that your devs may want to take a look at - as the client is clearly confused about whether backup is turned on or not - it wont let you disable it, but it behaves as if it is turned on.

Anyways thanks for all the attempted help, at least we got there in the end.

Sanchez
Dropboxer
Hey, @Kiwidude, thanks for reaching out.
I’m sorry to hear about that, and I’ll do whatever I can to help you and your dad out.
Now, it seems that at some point, your dad enabled the Computer Backup feature of our desktop app. That’s where the “My PC…” folder came from. After enabling this feature, it can be disabled with the steps shown here, but this needs to be done prior to uninstalling our app from the machine.
Let me get some info for you, so I know where we are at this point:
Let me know, and we’ll go from there!

Thanks very much for the reply! In answer to your questions...

1. Windows 10, latest version of your app downloaded from the website yesterday.

2. The app was last "running but with syncing paused". My Dad has just gone on holiday so he would have turned that computer off so not running right now obviously! He has turned off syncing on his machines until this all gets resolved.

3. All his files are on his computer in their original locations. The only files/folders inside his dropbox folder were his normal "sync" folders.

Unfortunately with him doing the holiday thing I can't get him to immediately try things but we would love to have a list of exactly what we need to do for when he gets back. I only found the post about checking backup settings after doing the reinstall where they most definitely are not turned on now. The list of My PC folders it offered to backup was also slightly less than those I see in his web folder online (I listed the five I see on his account in my post above, and the Dropbox app only offered to backup three of that list when I go to the settings).

Could you go to the Backup tab under the desktop app's Preferences to check if it's asking you to Manage or Set up?

If you could send us a screenshot, that would also be super helpful.

My Dad is away at the moment so I cannot grab a screenshot, I will do when when he gets back in 2 weeks. I am almost certain it said Set Up though - because when I reinstalled the app it gave me the option to setup a backup which I chose no to, then I re-checked afterwards in the Backups tab nothing was ticked in the list of folders so I'm assuming the button was Set Up rather than Manage from memory. It is "possible" that somehow Backups were turned on prior to me reinstalling but now the GUI is confused about it's state? Unfortunately it is still trying to sync the whole computer folders when we turn sync back on.

I still don't know how my Dad could have managed to enable backups in the first place though. He has certainly never been into the Preferences dialog in his life, but the how he got there is less important than how do we fix it at the moment.

Lusil
Dropboxer
I understand how important this is for you and your father, so please take as much time as you need to gather info.

Give me a nudge whenever you have any updates and I'll make sure to get back to you as soon as possible.

In the meantime, I hope you have a wonderful week ahead! 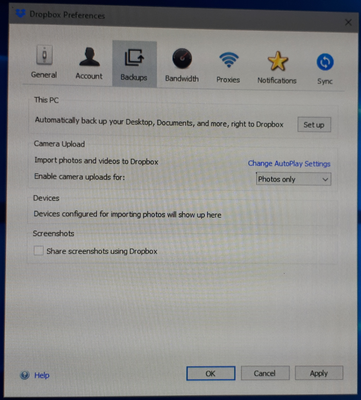 Dad failed in his ability to take a screenshot so you get a photo instead! As you can see it says "Set up"... please let us know a way forward from this...

Jay
Dropboxer
Hi @Kiwidude, generally, this means that the computer backup feature is disabled. If you click it, what do you see there, are any of the folders already selected or are they all unchecked?

If it is definitely unchecked, try going to the Account tabin the desktop preferences, press Alt+H, and choose 'Reset OS folders' to see if this helps.

Ok, I have tried a few things with Dad online just now. When we click on "Backup" and then "Set up", it shows three folders ticked. We tried unticking the three folders and clicking "Not now", but reopening the dialog shows them ticked again.

So then we tried the Alt+H trick on the Account screen, and followed the instructions saying how it would stop the backup etc which all sounded perfect.

Then we turned Sync back on, and it apparently said it was trying to sync thousands of files to his PC. I got him to pause syncing again. We went into Selective Sync, it showed his My PC in the list, we try unchecking it and clicking apply, we get the expected warning about how files would still exist on dropbox.com but then going back into Selective sync it once again shows up as checked.

Going into the dropbox.com for his account, the My PC folder is still there, and it still has no option to be deleted.

So basically we are still in the exact same state as we were several weeks ago - Dropbox is screwed up and does not want to relinquish what it is trying to do. Please advise what we can do...

Jay
Dropboxer
Have the folders been reverted to their former location?

If you move files out of the Dropbox account, do they move out of the desktop folder as well?

If need be, could you try these steps?

0 Likes
Reply
Poll
How do you get refocussed while working from home? Do you find any of these options keep you from getting distracted?
Show Choices
Hide Choices
If you’re looking at this thinking ‘None of the above’ then you can check out our helpful focus tips here.