Syncing is stuck on my Windows 10 computer. Can you help?

Syncing is stuck on my Windows 10 computer. Can you help?

I am running dropbox in Win10. I started having issues the last couple days with syncing. The icon would show syncing but the sync was not resolving.

I needed to make some space anyway so I moved about 2 GB of files to trash on the web interface and also deleted them from my local Win10 drive (in retrospect I should have maybe done only one or the other).

I figured I needed to reinitialize my Win10 machine since everything was on the cloud. So I

1) made a copy of my local Dropbox folder

2) Broke the link from my web interface

5) Downloaded new version of Dropbox and installed, trying to skip backup of documents, desktop (and more).

6) Dropbox has been running now for hours and no online files are displaying and the one file that I transferred to my local folder is also not uploading. Dropbox reports 'Syncing' but there is almost no Dropbox network activity in the windows task manager (0.1 Mbps every minute or so).

7) When I try to access settings to check my settings to make sure it is not trying to sync my documents, desktop, etc., I can't access those settings. I don't see the 'import' tab mentioned elsewhere in the forums. I have a 'backup' button, and the dialog reports 'This PC: Automatically back up your Desktop, Documents, and more' but there is no checkbox to turn it off. But I don't see changes online or where to find if it trying to backup these items. But it has been running a long time and I don't see any progress.

I appreciate suggestions to reinitialize my local computer! I am baffled that the reinstall did not fix it and breaking and restoring the link. I have been nervous to make changes on my other two devices.

Additonal info: after looking at https://help.dropbox.com/installs-integrations/sync-uploads/files-update-issues, I find nothing in my Symantec quarantine. My hard drive has about 250GB free. The subfolders under .dropbox.cache are empty.

I am on a managed computer, so I am unable to turn off the firewall, but Dropbox is enabled through the firewall when I look at the entries.

I turned off my Symantec Endpoint protection, but that did not help.

When I sign out and relink, selecting Advanced, and then Selective sync. Dropbox cannot get a list of folders and after a short delay reports 'Unable to connect'.

Try using IISCrypto.exe and checking "best practices" then apply and reboot.  Worked for me

Hey there @Carl_in_MI, thanks for reaching out to us here!

Since it sounds like the computer backup is still enabled on your computer, can you please try following the steps outlined towards the bottom of this article. You would indeed need to be looking at your backups tab.

From there, does the option show "manage backup" as mentioned in the steps from the article linked above, or "set up"?

Once you disable the backup, or if the option is showing "set up" instead, then can you try moving the content of the backup folder in Dropbox back to their original locations?

Let me know how it goes and we can take it from there!

Thanks for the response. I don't have an option to manage because it has never really started to backup. I can't seem to 'back out' of this selection and I am not sure what is set. Below is my screen shot. 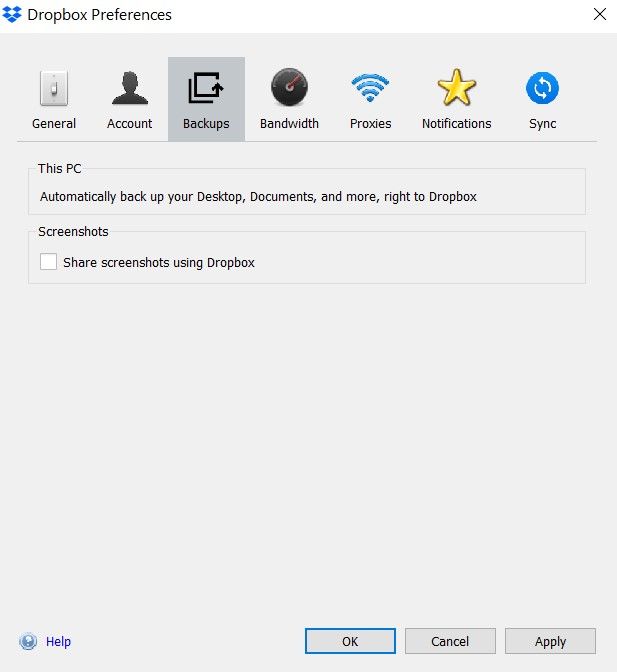 When I try to unlink the computer, the dropbox sign in reappears, and when I select 'Advanced' and try 'Selective Sync' I get this: 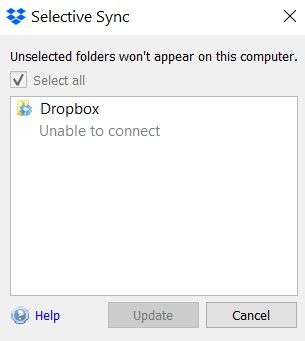 So I have to go back to the default selection. Then the window opens to backup everything. I clear the boxes and select 'Skip'. 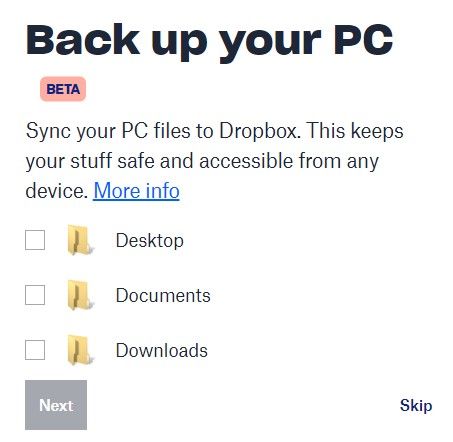 Nothing shows up in my sync queue. The Syncing icon just spins and spins.....: 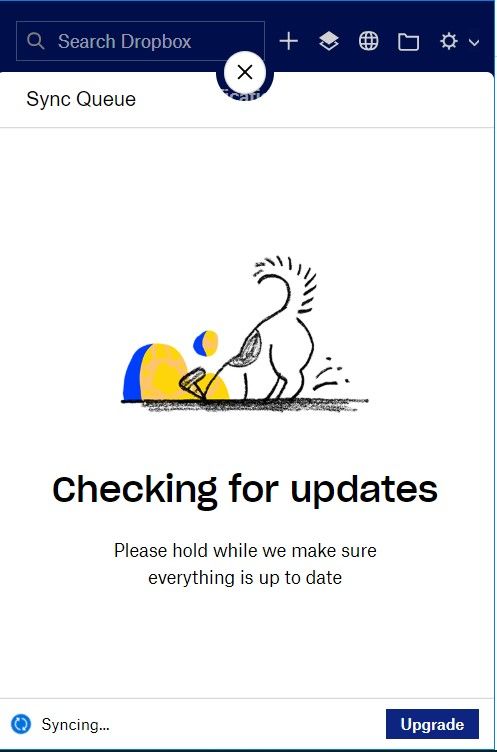 Thanks for getting back to me here @Carl_in_MI!

That's some rather strange things that you're seeing there. You should indeed be seeing a button like option under the "This PC" section in your Backups tab.

However, since you unlinked and relinked your account without enabling the backup during the setup (from your 2nd screenshot) then it should now be disabled. Just to clarify, in your Dropbox folder is there a folder called "My PC (xyz)"?

There could be a few reasons that the syncing is stuck uploading the file you added locally to your account, which may be due to a connection issue from what you see from the selective sync settings. However, let's see what we can find.

Firstly, which version of the desktop app do you have installed on your computer? Also, when you click the Dropbox icon in your system tray, can you click the gear icon in the top right of the window and choose "View sync issues" and let me know what you see there?

I do not have a PC folder.

I also do not have any sync issues reported - it is not syncing even though I can log in.

Okay so it doesn't look like the computer backup is enabled at all on your computer @Carl_in_MI, which is great as we can rule that out now.

Can you try the following to fix any incorrect permissions that could be causing the stuck syncing?

If this doesn't resolve the issue, please follow the steps again and instead click "Fix Hardlinks". The app might need to sync for a while after doing this, so please just keep an eye out for any progress.

Let me know if that does the trick!

Thanks for your contining help. I reset permissions and I also reset hard links and for both the dialog box reported that they were fixed, but the situation has not changed. My computer ran all day yesterday. I have another computer on the same network connection that is syncing OK so it is a configuration issue on this particular computer.

You mention above clicking my initials, but they are not appearing, only the setting gear icon. Here is the firewall on my private (active) network

I do not see settings for particular ports.

When I go to Sync on my preferences panel, I still get 'unable to connect' for selective sync. 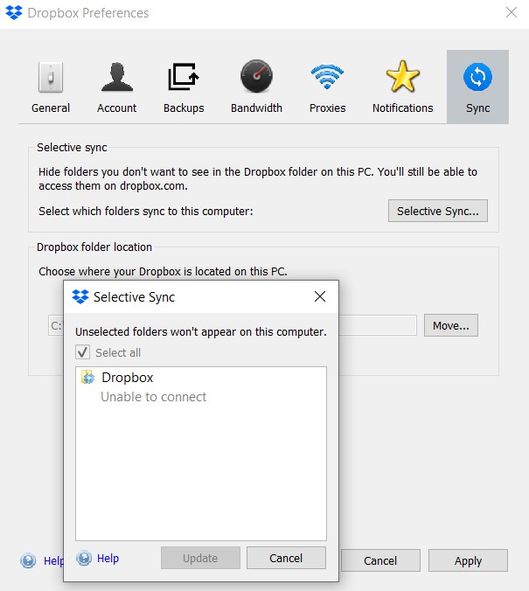 Hey @Carl_in_MI, I just wanted to jump in and ask if you've tried reinstalling the desktop app with admin permissions?

Could you also temporarily close any third party apps, like antivirus and security software, that could be hindering the syncing process?

Let us know how it goes, thanks!

Yes, this is the first thing that I tried before contacting support. Since reinstalling, I have tried disabling them again to now avail. Dropbox recognizes my login because I get my username, but my initials do not show up on the dropbox banner and it is not connecting all the way through.

Over the weekend, I disabled as much of my Endpoint Security as I could and made sure that Dropbox was not blocked by my firewall (as much as I can tell) since this is an administered computer.

What are the correct permissions for the Program Files(x86)\Dropbox? My computer has those a write-protected and modify-protected for all applications packages and all restricted application packages and from my user account.

Thanks for the info @Carl_in_MI!

Would you mind just double checking if any of the Dropbox domains are specifically blacklisted at all, if you haven't already? It may be that just one of them is being blacklisted and causing the connection issue.

Also, there are specific ports that Dropbox will need access too, which you can find out more about here.

If you've installed the app with admin permissions then you should be set, usually this issue is caused by something blocking the connection to Dropbox.